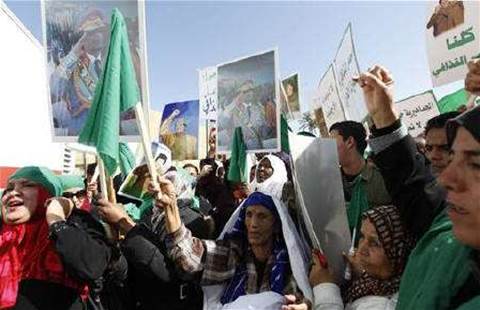 Responds to protests against Gaddafi.

Internet service has been cut off in Libya for a second consecutive day as protesters step up demonstrations against longtime leader Muammar Gaddafi, a U.S. company that monitors Internet traffic said on Saturday.

Arbor Networks said data collected from thirty ISPs around the world showed that online traffic in and out of Libya was disconnected abruptly at 7:15 p.m. EST on Friday after two partial interruptions earlier that day.

Internet traffic returned several hours later at reduced levels only to drop off completely again at 4:55 p.m. EST on Saturday, according to the Arbor data.

Dozens of protesters were killed in clashes with Libyan security forces in the eastern city of Benghazi on Saturday, a witness said, in the worst unrest in Gaddafi's four decades in power.

The Internet has been used in recent weeks by anti-government protesters in North Africa and the Middle East to help coordinate their demonstrations.

Egyptian authorities cut Internet service for a few days during a revolt that succeeded last week in toppling Hosni Mubarak after 30 years in power.