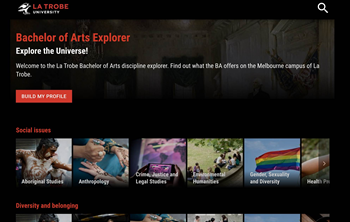 Big plans to roll platform across other 'key courses'.

La Trobe University is giving prospective Arts students a Netflix-inspired experience they can use to select a major from the more than 50 on offer and to then “know what career outcomes that would give them”.

Hildyard said the Explorer is currently at a minimum viable product (MVP) stage.

It was designed and built on an IBM cloud and AI stack in the IBM Garage, which is essentially a network of physical hubs aimed at helping customers to quickly turn an idea into a product.

“A Bachelor of Arts is one of the major courses universities offer, and the problem is that our Arts course has over 50 majors,” Hildyard said.

“A lot of those majors, like archaeology for example, they will never really come across in their studies at high school.

“What we found is traditionally, Arts students would apply for the course [but] often they would drop out, or not go through the acceptance process because they just got confused about what to study.”

“What we saw with the benefits of the Bachelor of Arts Explorer was that the students were able to actually select their major and know what career outcomes that would give them.”

Hildyard said the Explorer was built over a four-week period.

He said the idea was to “present a Netflix-type view to the students, where they could scroll through and go, ‘I want to know about that major’, and based on a series of questions like, ‘Do you like critical thinking? Do you like reading? Are you interested in this?’, it’s pulling in information.”

Prospective students could then ‘favourite’ a major that appealed to them.

Although early days, Hildyard said the University had already seen higher offer acceptance rates in Arts, which it attributed to the existence of the Explorer.

“The University absolutely has a priority around student acquisition,” Hildyard said.

“What we've been able to track through the use of this is that … after the students have their offer for a Bachelor of Arts  the acceptance rate is absolutely tracking higher than it has in any previous year.

“The only thing that we changed [in that space] was to deliver the Bachelor of Arts Explorer.

“I think that's a great outcome and it fits into our ‘enabling student acquisition’ piece, which is critical to our revenue.”

Hildyard said the University had bigger aims for the ‘Explorer’ technology - even at the project’s outset - though it had honed in on the specific Arts use case through its work with IBM Garage.

“Our bigger vision is to actually build something out for the university that can lay across our key courses and provide similar information,” Hildyard said.