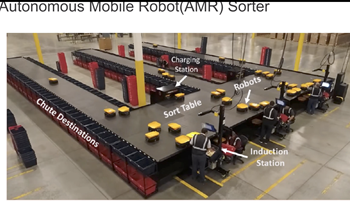 The AMR sorter, as displayed by Kmart Australia.

And some data analytics work around it.

Kmart Australia has shown off a roboticised sortation system and an associated data project to improve the robots’ performance, though it is unclear to what extent - if any - the system is in use.

The sortation technology, which is typically used to classify and move products around a warehouse for e-commerce or store order fulfilment, appears to be Conveyco’s TiltSort-Bot system, where fleets of yellow robots deliver products to bins that are designated for different dispatch locations.

It’s unclear whether Kmart Australia has actually purchased the technology or intends to put it into production or not.

A Kmart Australia spokesperson did not return iTnews’ emails or calls.

Das showed off a “sample setup of [an] autonomous mobile robotic sorter”, technology she said “is used to sort products like apparel, soft general merchandise and cartons to stores”.

Products are scanned in at an induction station by an operator, and then placed on a robot that takes and tips it into a specific bin.

“[The bin] is the logical destination of the stores,” she said.

Das said that “unstructured data is captured from these robots and transformed into more structured data within the [retailer’s] Snowflake platform”, which is a relatively new addition to its data platform.

Das also showed off a “sample operational performance dashboard” that she indicated “is displayed on big screens at [a] distribution centre for operational teams and management.” 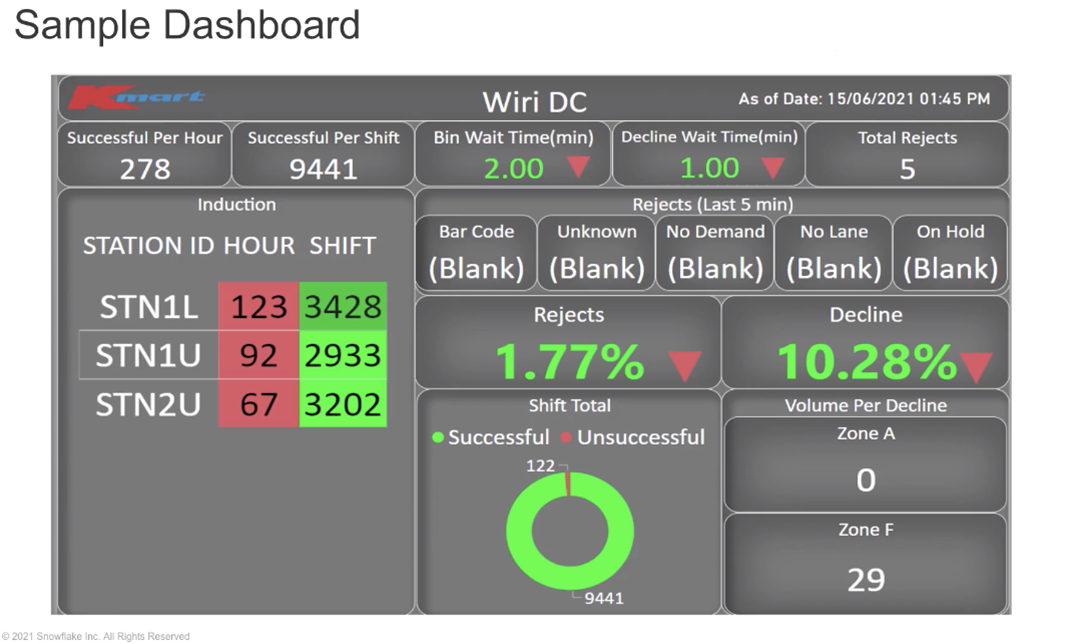 Data on the displays is refreshed every five minutes.

“The main focus here is to reduce rejects as rejects [mean] rework for us,” Das said of the analytics work.

“Some of the rejects could be barcode rejected, store is unknown, or it could be a product is already inducted or if the product is not in the sort plan.

“The other focus here is also to reduce declines. Declines are fragile items that are not sorted using AMR [autonomous mobile robots] and not part of the sort plan.”

Das noted that one of the goals of the analytics work is to improve efficiency of the technology by increasing the amount of throughput it handles per hour and per shift.

She said the analytics team had “developed quite a few real-time drilldown reports with a wide range of metrics.

“In addition to improving the efficiency of the supply chain by the robots, the real-time dashboards empower us to monitor performance and integrity of the sorter 24x7,” she said.

“This will lead us to faster delivery, better availability of products, less out-of-stock [items] and happy customers.”

Kmart has been making changes around inventory and fulfilment over the past year.

Last year, it became the first Australian retailer to deploy an Android Voice based system that guides workers in how to fulfil product orders for its stores and online operations.

In April this year, it revealed plans to deploy an inventory tracking robot called TORY into every one of its physical stores in Australia and New Zealand over the next 15 months.