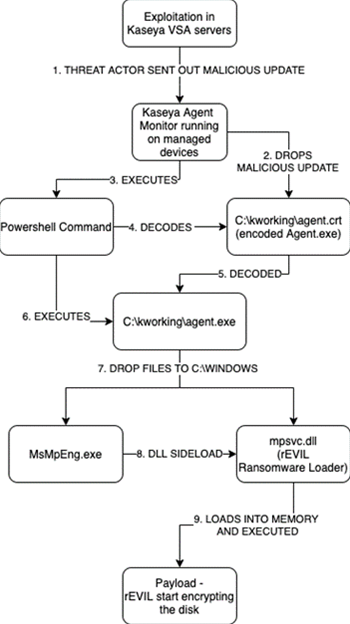 Researchers at the Dutch Institute for Vulnerability Disclosure (DIVD) found seven vulnerabilites in Kaseya VSA on-premise, and reported them to the vendor ahead of last week's REvil attacks worldwide.

Kaseya was quick to respond and to develop patches for four of the vulnerabilites but two critical bugs remain to be addressed.

"As we stated before, Kaseya’s response to our disclosure has been on point and timely; unlike other vendors, we have previously disclosed vulnerabilities to," DIVD researcher Frank Breedijk wrote.

One of the vulnerabilities reported by DIVD were used by the REvil ransomware criminals, in last weekend's attacks ahead of the 4th of July national holiday in the United States, DIVD said.

Kaseya patched a remote code execution vulnerability on April 10, and a Structured Query Language (SQL) command injection vulnerabilty along with a local file inclusion and Extended Markup Language external entity flaws on May 8 this year.

The critical credentials leak vulnerability is rated as 10 out of 10, and the also critical 2FA bug is rated 9.9 out 10 on the Common Vulnerability Scoring System (CVSS) version 3.1 with low attack complexity and no user interaction required to exploit them.

DIVD said it is holding back from releasing full details of the vulnerabilities until such a time they have been addressed by Kaseya.

Trustwave found that the malware won't execute on systems that have Russian, Ukrainian, Belarusian and Romanian default languages set.

Spammers are also attempting to exploit the Kaseya attacks with phishing emails that claim Microsoft has issued an update to protect against the vulnerability in the remote management and monitoring system, Trustwave warned.

Clicking on the links in the phishing emails could execute the CobaltStrike malware from a remote location, Trustwave said.