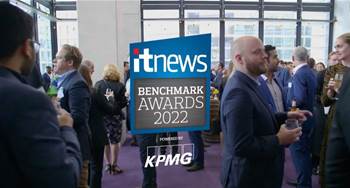 Sydney event returning to shine a light on standout Australian IT projects.

The 2022 iTnews Benchmark Awards ceremony is moving to June 15, 2022, in response to the current Covid situation.

The gala dinner, to be hosted by KPMG at its Barangaroo offices in Sydney, will be the first in two years to bring the finalists together in person to shine a light on the nation’s standout IT projects.

Guests will learn which of their peers' projects in government, healthcare, finance, agriculture, logistics, industrial and consumer sectors won the judges’ highest praise.

They will also have an opportunity to talk about the value they have delivered to government, industry and the public.

The event will provide a snapshot of where Australian IT leaders and their teams have focused their attention since early 2020, when many were dealing with Covid-related digital projects.

The iTnews Benchmark Awards ceremony has previously hosted IT leaders and practitioners from the likes of Airservices Australia, Australia Post, Carsales, Commonwealth Bank of Australia, Deakin University, Reserve Bank of Australia, Transport for NSW and many other organisations.

This year’s finalists will receive tickets to the ceremony, and additional tickets will be released in the leadup to the event once capacity limits are confirmed.

Finalists will be announced on the iTnews website in late March with a series of videos showcasing the projects.