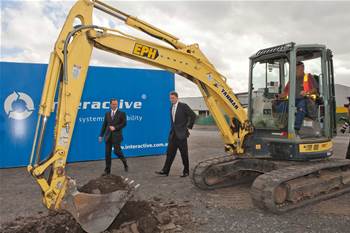 Breaking ground at the Interactive facility site in Melbourne.

IT services firm Interactive has scaled back plans to build out co-location data centre space in Melbourne, redirecting a planned $50 million investment into managed services and office space.

Managing director Christopher Ride said the change was sparked by the impending entry of a host of large co-lo players in Melbourne - including NextDC, Metronode and Digital Realty - and faster-than-expected adoption of IT managed services.

"You lay these plans down and $2 billion in [data centre] investment gets slated between," he said.

"We realised that compared to that kind of investment, $50 million paled into insignificance."

Ride said that although the first stage build would go ahead, remaining phases had been put on ice.

"This new building only has half a floor of data centre because we're not focused anymore on co-location," he said.

"What we've said is, 'Let's just take the first stage [of the planned build] but we won't plan in the additional stages as part of the building fitout'."

Construction is due to begin in June 2012 with planned completion in September 2013.

Despite the reduced data floor space, Ride said Interactive had increased its planned investment in the new site to $60 million in total.

The company planned to build a state-of-the-art office space in a bid to attract and retain "the quality of staff that can liaise with the customer and make their IT much more efficient".

"A managed services rack typically needs one person to administer it on a loose how-many-people-do-you-need basis," he said.

On that basis, if Interactive puts in 200 racks, it would require 200 workers to administer them on behalf of customers.

"Let's try and build our 'people' facilities to try and scale proportionally to our data centre facilities," he said.

The new office design included ﻿an industrial kitchen, collaborative workspaces, telepresence systems and a "slide between levels two and three".

"The metaphor for the slide is that gravity is your friend and that when you've got forces that are working with you, then you achieve so much more with a lot less effort," Ride said.

Victorian Premier Ted Balliieu yesterday announced that Interactive's investment would create 300 jobs in the state over four years, and a further 150 jobs during construction and fit-out phases.

Although Interactive is moving away from selling raw data centre real estate, it is not planning a complete exit from the market.

Ride revealed plans to form a partnership with an existing co-location player and sell branded space from that third-party facility, although he noted the plans were "in the early stages".

But he said there were danger signs that the glut of new co-location entrants could put downward pressure on prices.

"In my view, [until now] you've had no data centre space and pretty much the data centre providers have been able to call the shots on prices and timelines. [Soon] you're going to get oversupply," Ride said.

"The worst scenario that you can get as a player like us is to have high cost data centre space and then the price lower than your at-cost.

"I think every data centre provider in the short term should be relatively concerned about what's going to happen in co-location."

Ride said that Interactive's decision wasn't a "negative defensive strategy" but a resource reallocation to a part of the business that had exceeded even his growth expectations.

"We grew another 25 percent this year which made it our sixth consecutive year [of growth]," he said, noting the prospects for a seventh year were good.

"The take-up in IT outsourced [services has] been much faster than I could imagine. You have to allocate resources to where you provide the most value to your clients... [and] the real value is in services".