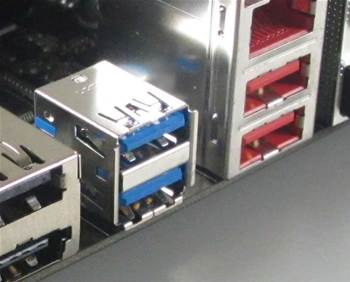 The first wave of Intel's upcoming Z87 chipsets are being shipped with a bug affecting USB flash drives, according to sources.

The issue affects the USB 3 controller in the first batch of the chipset - the version that will ship with the initial Haswell systems, the successor to the Ivy Bridge architecture, due to launch in a few months. The issue won't be rectified until the second version arrives in July.

The bug causes the chipset to cease polling some drives when a Z87 system enters a sleep state. The USB drive does not wake up with the system, with the user forced to reconnect the drive in order to continue working.

Any applications accessing files on an affected USB drive will lose them if the PC enters a sleep state.

The bug is not as dangerous as the issue that forced the recall of Intel's Sandy Bridge chipsets in 2011. A design flaw in its Cougar Point chipsets for Sandy Bridge caused concern the SATA 3Gpbs controllers could degrade over time.

The issue lay in the silicon itself and was unable to be fixed, forcing Intel to recall the product and begin production of new chipsets.

Intel declined to comment on the Z87 issue but said it was "continually working with customers to resolve any sighting reported pre or post launch and won't comment on NDA technical work we are doing."

Got a news tip for our journalists? Share it with us anonymously here.
Copyright © PC & Tech Authority. All rights reserved.
Tags:
chipsethardwarehaswellintels3 stateusb flash drivesz87