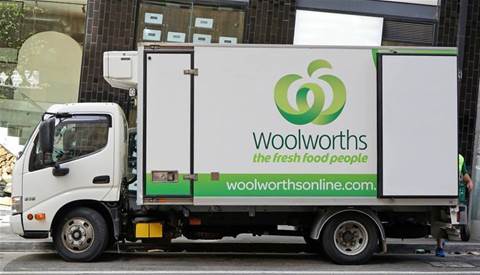 Analysis: The rational, irrational and what might happen next.

And a freeze on online sales.

Australia’s national flip-out might make for torrid nightly news and massive social media traffic, but it’s time for a bit of a sanity check.

The reality, no matter which way you spin it, is that the infrastructure that underpins Australia’s still nascent online grocery delivery market was just never going to cope with the COVID-19 surge.

Coles' and Woolies' online portals are down because when real panic grips, there is simply not the human or robotic muscle to deliver on demand spikes that seemingly vortex in on themselves, snowballing as they go.

The surge that physically broke online

Let’s start with a well-reasoned guesstimate and a bit of a timeline. UBS broker Ben Gilbert reckons supermarket sales are up at least 25 percent year-on-year thanks to the recent hoarding epidemic that is spreading a lot faster than the virus itself.

That’s not just big, it’s huge, and will deliver a pretty big bump to grocery retailers’ topline revenue in a sector that has recently been challenged by the drought and a summer holiday season devastated by bushfires.

You – quite literally and evidently – can’t replenish the stores from the warehouse at that rate, let alone fulfil click-and-collect and online delivery.

So, in this digital age when decent payments outages can hammer an economy, the inability of Coles and Woolworths to deliver groceries reverberated loudly through the echo chamber of fear.

It didn’t help that the online retailing industry has for years super-hyped major buying events – think Black Friday and Cyber Monday – seeking to create a FOMO (fear of missing out) frenzy to propel emotion driven sales rather than rational ones.

The timeline of events is instructive.

Last week both Woolworths and Coles revealed their online shopping systems had surged past actual delivery capacity the week prior and then tried to get them up and running again.

There was probably an appetite, definitely the option, to shutter online grocery sales there and then until the COVID-19 rampage ran its course, but the optics would have been pretty awful and potentially could have fueled already rampant fears.

Over the next week, with physical stores badly depleted and trucks unable to keep up with demand for restocking, it became clear both Woolies’ and Coles’ online grocery portals were becoming logistically untenable.

So on Sunday Woolworths reached for a crucial circuit breaker and took the unprecedented step of shelving online delivery from its Victorian supermarkets as well as pausing click-and-collect from stores until further notice.

Coles on Monday put similar contingency measures in place, with both of the grocery giants’ online offerings having wobbled badly in terms of fulfilment early last week.

On Tuesday UBS belled the cat in terms of hoarding volumes with its 25 percent year-on-year increase estimate, a particularly awkward number that logically translates to significantly increased earnings for supermarkets.

Confronted by stores with empty shelves, Woolworths Group CEO Brad Banducci on the same day imposed purchasing volume limits across Woolworths’ range with no re-opening of online sales in sight.

On the same day, Labor’s shadow minister for local government hopped into some councils not lifting truck delivery window restrictions to let supplies in.

Technology vs the people

For consumers raised on a steady diet of hyper convenience primarily enabled by online shopfronts and apps – Coles’ partnership with Uber Eats is emblematic here – the sight of empty shelves is naturally confronting.

A year ago, both Coles and Woolies were scrambling to deal with the meal home delivery phenomenon as dark kitchens sprang-up left and right to eat their share of the shopping basket.

That flipped with the virus landing in Australia as the limits of technology were exposed.

Until recently, it was the issue of technological performance and execution, especially online, that was the investor litmus test for supermarkets and retailers more broadly as commerce moved from bricks to clicks.

The issue that has now been exposed is that there’s a very physical mismatch around expectations of what technology can physically deliver. In a store you can see the shelves are empty. Online, you’re scrolling item by item.

How we got here: psychology and scale

In simple terms, the problem is as soon as the online doors open, the stampede begins with demand so aggressively outstripping finite online fulfilment capacity the channel becomes choked.

Anyone that’s ever sat through the lengthy investor analyst calls that accompany Woolworths’ and Coles’ annual and half yearly profit updates will have heard both grocers aggressively talk up their online sales that, until the last six months, have been profit margin dilutive.

Even then, additional profit margin over conventional in store sales is so skinny it isn’t material and is not disclosed.

In August 2019 Woolworths told investors online sales were worth around 4.2 percent of revenue at $2.5 billion, a hike of 32 percent over the previous year.

Click-and-collect has been the big winner in terms of improved profit margin, but no matter which way you look at it online is still a single figure fraction of overall store sales volume.

Given the UBS 25 percent year on year estimate of the scale of the surge, it’s clear there would be no way capacity could ever meet demand for delivery given the fact supermarkets were already trying to shift online shopping to collection in store.

So when consumers see pictures of physical shelves stripped bare, not to mention the legitimate fear of crowds, they hit the online channel with everything they have.

But there’s a kicker and it’s a big one. If Coles and Woolworths actually tried to deliver the kind of volumes online that customers were demanding, it would seriously strip urgently needed capacity out of its visibly strained store network, arguably fueling further panic and fear.

Online delivery may be suspended for Woolworths and Coles for the time being, but that probably won’t mean the trucks will remain idle for long.

Both Coles and Woolies’ delivery networks and fulfilment centres are a national distribution resource that could well yet play a vital role in the event of geographic population lockdowns - if they hit.

This scenario would also need some sort of web interface so that vulnerable people in need or those areas designated for isolation to order, but it would clearly need to have access restricted and authorised.

Both WooliesX and Coles have major web development and the agile skills to have such a service up and running quickly.

They may not be talking publicly about it, but the chances are they are working on just such a scenario right now.