Inside the stalemate on Australia's piracy code 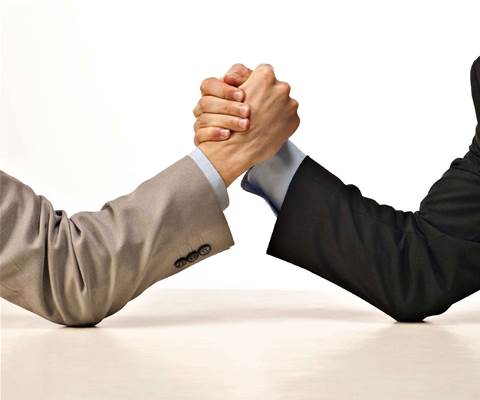 Australia's internet service providers and rights holders remain stuck in a stalemate over the costs involved in the industry copyright infringement code five months after it was submitted, leaving the start date for the code's operation unclear.

The Communications Alliance handed the ACMA its draft version of the industry graduated warning scheme in April, after being warned by the government to come to an agreement within 120 days or have a code mandated for them.

However, in a replay of 2012 failed talks, the April draft document [pdf] contained no mention of the allocation of costs of the scheme.

Because of the disagreement, the ACMA is still yet to register the code almost five months after it was submitted for approval.

It also means the parties won't make the September 1 date specified in the draft code for the commencement of its operation.

The code will not come into effect until the issue has been resolved.

In an industry briefing today, the Communications Alliance revealed the heart of the costs issue lay in how the first 200,000 notices - the annual cap of notices that can be sent - would be funded and by whom, as well as the broader package of commercial arrangements.

"It will be critical we resolve the [costs] issue soon for the code to progress through the registration process," copyright code working committee chair Gary Smith, head of regulatory compliance at Optus, said.

However, he indicated a resolution was unlikely to be reached before September 1.

"In the coming days, weeks, months we'll see where we get to with the commercial arrangements and the ACMA's registration code."

Foxtel director of corporate affairs Bruce Meagher said there had been no direct pressure from the government to meet any particular timeline.

"As long as they're satisfied we're making progress, and we have been, they'll be ok," he said.

"There will be a point where they'll say 'you have to get this thing done', but we haven't got there yet."

Should ISPs contribute to cost?

Meagher said rights holders had agreed funds should be paid into a pool upfront so ISPs could be confident there was money available to fund the scheme.

But beyond that, he said, the parties may need arbitration from a judge to solve the remaining issue of how much rights holders - and ISPs - should contribute.

Foxtel wants ISPs to fund part of the scheme, but the Comms Alliance says rights holders should be required to pay the majority of the costs given the "enormous financial upside that will flow to rights holders from changing the behaviour of online infringers".

"We've contended that there are reasons why ISPs should contribute some portion of that cost, partly because it will help drive efficiency into their organisation .. but more broadly because we're all in this together," Meagher said.

"And as ISPs increasingly become content providers, the business imperative to make sure people are valuing those services will become more and more important [to them]."

He argued that the apportioning of costs should be based on the assumptions of an "efficient" ISP - not the "lowest-common denominator, inefficient ISP".

What the independent advisor said

The parties enlisted PriceWaterhouseCoopers earlier this year to conduct an independent assessment of how much the scheme would likely cost ISPs.

The industry has estimated its costs to be around $27 per IP address, while rights holders said the figure was more likely $6 per IP address, of which they were prepared to pay half, iTnews understands.

It is understood the PwC report, which the parties received last month, put forward a range rather than a specific dollar figure, which tended toward the ISP argument of $27 per IP address.

"If the cost is too high, the scheme won't be used," Foxtel's Meagher argued today.

"We saw that in New Zealand where the government mandated $25 per IP address, and no-one used the scheme. We've got to work out a way of setting a price that encourages the scheme to be used."

The code applies to around 70 of Australia's biggest internet service providers, or all ISPs that provide residential fixed internet services to more than 1000 account holders.

If registered, the ACMA will have the power to direct telcos and ISPs to comply with the scheme. Civil penalties of up to $10 million apply for corporates that fail to comply.