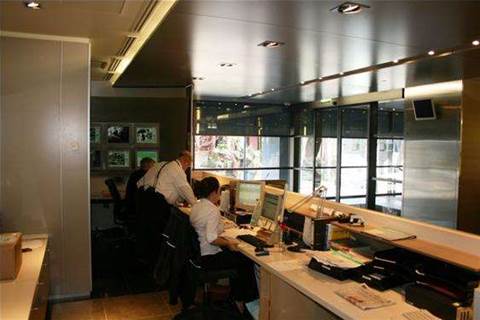 iTnews gets a rare and exclusive look at the results of the last phase of construction and power and cooling upgrades at one of the region’s flagship data centres – and we have the photos to prove it.

Global Switch could begin construction on its Sydney2 data centre as early as the fourth quarter with expectations the current facility's floor space will be ‘full' by year end.

Planning for the new centre, to be situated behind the current one in Pyrmont on the city's CBD fringe, is already at an advanced stage, according to managing director Peter Turvey.

"We're looking at a requirement for it from the backend of 2010 or first part of 2011," Turvey told iTnews.

"We'd have to be building by Q4 of this year [to have it ready in that timeframe]."

Turvey said that Global Switch is approaching the build as an extension of the original facility, which itself is nearing completion of the final stages of fit-out and a major cooling and power upgrade (see photo gallery right).

"It will be a fundamentally green building incorporating as much green best practice as we can put in it," Turvey said.

"Free cooling is something we'll consider if the cost and savings make it worthwhile.

"A bigger thing we'll look at is [power] co-generation. We're including that in our design plans but there's still some way to go before the design work is complete".

Turvey said that Global Switch hadn't yet reached the stage where they have discussed the availability of green building incentives with the Federal and State Governments.

"From their public statements you would think that the Government would see this type of project as being very significant, but it may well be that the sort of assistance that is on offer might be quite limited [right now]," Turvey said.

He's also not taking the cost of building a new facility lightly. "These types of facilities haven't become any cheaper to design and build," Turvey said.

Global Switch appears to be leaning towards a raised floor environment in Sydney2, despite recent debate in the industry over whether to place racks directly onto concrete to cope with predicted denser environments.

"We have the flexibility in the current centre to put dense racks directly on the floor and it's something we're looking at for Sydney2 but we're still assessing how much benefit that [configuration] has for the facility.

"In the design of our existing facility we tend to find that raised floors are the most cost-effective and efficient method of delivering cooling across significant floor space.

"Our power usage effectiveness (PUE) rating of 1.7 says our clients are getting that benefit," he said.

According to the Green Grid, a PUE approaching 1.0 indicates 100 percent efficiency. It is acknowledged that most data centres average around a 2.5 measure, although the Grid reports that 3.0 or more isn't uncommon.

Another reason for Global Switch's position could be the way they view the density debate itself.

"We're yet to see the higher density trend," Reid said.

"Clients are telling us that between two and two-and-a-half kilowatts per rack is sufficient.

"Certain customers want higher densities - some want 10 or 15kW within a particular rack which our existing facility can easily cope with - but at a wholesale level when we design a suite, it's generally to 1,000 to 1,200 watts per square metre density."

Read on to page two for Sydney1's power rethink