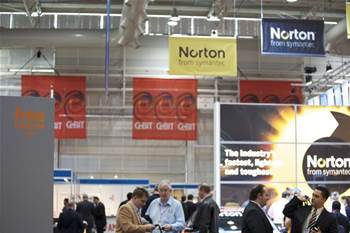 Take a virtual tour through the halls at Australia's biggest IT trade show.

This year's CeBIT IT trade show kicked off with the usual round of speeches and keynotes, but it was on the trade floor that the action was to be found.

Private enterprise of all shapes and sizes orbited the big, government stands that occupied the centre of one of the major halls. Australia, Britain, China and South Korea all had umbrellas for their IT exporters.

Many vendors resorted to spokesmodels ("booth babes" in industry parlance) to excite interest in their products - but judging by the crowd on the Haymarket stand (publishers of iTnews.com.au, PC Authority and CRN, among others), a fleet of iPads would have generated more enthusiasm.

As usual, CeBIT Australia attracted a broad range of exhibitors from small resellers and developers to distributors, systems integrators, ISPs and hardware vendors.

The show continues until Wednesday. Stay tuned for more coverage.