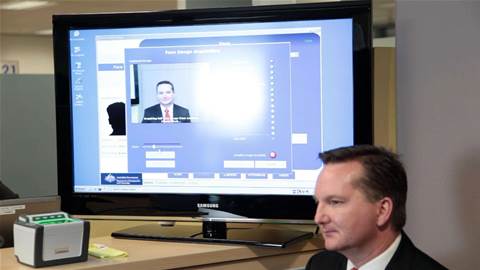 Immigration Minister Chris Bowen proves his identity to media at the rollout of Unisys' biometric collection scheme in Sydney.

The Department of Immigration is rolling out a $69 million biometrics solution to crack down on visa fraud that requires applicants here and overseas to submit to face and fingerprint scans, Minister Chris Bowen said today.

The four-year project, backed by a deed of agreement and foreshadowed in February by the Gillard Government, kicked off this week at department offices in Adelaide, the ACT, Brisbane, Cairns, Darwin, Hobart, Melbourne, Perth and Sydney and British Government visa application centres in Bangladesh, Zimbabwe, Yemen, UAE, Kuwait, Oman, Qatar, Bahrain and Saudi Arabia. The program will be expanded to seven countries in Europe, Africa, Middle East and Asia next year.

Melbourne and Sydney have been collecting voluntary biometric scans but this will now be mandatory, the Minister said.

The scheme will apply to those lodging applications on paper for visas overseas and protection visas in Australia. Online applications are exempted.

At the unveiling of the Unisys solution at the department's Sydney offices, Bowen said the decision to piggyback Britain’s Border Protection Agency biometric network for offshore processing saved money on building a dedicated network and would cut fraud in countries at risk of abuse by third parties applying for Australian protection visas.

“Australia is significantly expanding the use of biometric testing offshore and on-shore. [Applicants] will be required to provide a digital facial photograph and a scan of their fingerprints as part of their visa application, regardless of their nationality.”

The rollout countries were based on a desire to test the biometric system, countries that posed the greatest risks from those applying for Australian visas from outside their borders and infrastructure availability, Bowen said.

The Government estimated that identity fraud costs the economy $1.1 billion a year, although representatives at the announcement couldn’t quantify the cost or risks associated with such crimes perpetrated by visa applicants and which the system is intended to root out.

Unisys refused to reveal how much it was charging the Government for its portion of the off-the-shelf solution, the price of which included paying solutions providers, department staff, business processes and workflow customisation. Unisys has supplied such technologies to the Government since 2006.

It was a pragmatic decision to ride over the top of the British network and databases will be checked against those owned by the governments of the US, Britain, Canada and New Zealand, Bowen said.

Although no personally identifiable data will leave Australia and it will be encrypted while in transit, it will reside in plain text on the department’s identification services repository. No Australian information was stored in client PCs, endpoint devices or foreign government repositories.

The Minister would not say which Australian Government databases would be available to other countries’ governments or whether US and Australian state drivers' licences would be rolled into the international framework. It is believed that subsequent data sharing will be subject to normal law-enforcement memorandums of understanding and processes.

Access to the data by Immigration Department officers will be based on roles within each site such that a low-level operator, for instance, may see an applicant’s name but not their photo.

It is believed that the decision was prompted by growing anxiousness on the part of governments, especially Britain’s, struggling to verify the identities of those seeking access to its borders, especially under UN humanitarian provisions such as protection visas. Japan, for instance, requires travellers to submit to face and finger scans on arrival.

Although the Minister said the lessons learned would be applied to future Government biometrics deployments he said it was up to other Australian governments and Federal Government departments to make their own decisions as to their appropriateness.