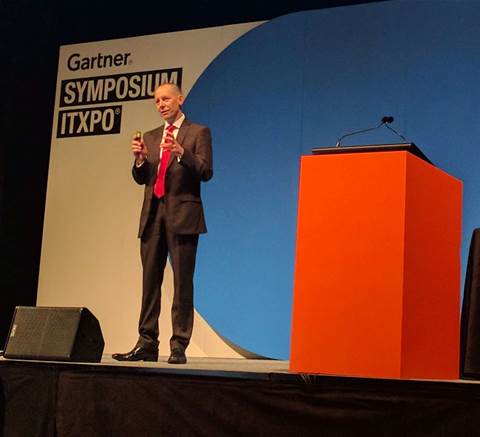 As it works to 'lead the world in tech'.

Immigration is making its way through a massive program of work to dramatically reduce the sprawling and complex IT environment it inherited as part of its 2015 merger with the former Customs agency.

The federal government announced in 2014 it would merge Customs with Immigration by July 2015 to create a “single, integrated border agency” in the hopes of both cutting costs and better protecting the country’s borders.

The IT leadership at Immigration and the former Customs “really couldn’t have made any more different decisions” when it came to technology sourcing, Brugeaud told the Gartner Symposium/ITxpo conference on the Gold Coast this week.

“Where there was a big piece of infrastructure that was supported by one provider, Immigration made one decision, Customs made another,” he said.

“As a result we have all the big players that you could possibly imagine working in our environment.”

Pre-integration, the combined environment counted more than 500 business and supporting systems, over 850 systems interfaces and services, around 750 databases, 20,000 desktops, and 3500 mobile devices among thousands of servers and multiple data centres.

“There’s quite a number of disparate technologies,” Brugeaud said.

The Immigration IT environment is highly integrated around a client data hub, which gives the department “quite a good view” of client dealings, but can be “very difficult to change”, Brugeaud said. The former Customs environment is centred around a data warehouse but uses “quite separate” systems.

“We’re simplifying that as much as we can,” he said.

So far, the agency has switched from Telstra to Optus, and moved all its service desk to Unisys.

It’s made the decision to move mainframe and midrange server and storage services from CSC to IBM - a shift that is due to be completed by December - and off Objective onto HP Trim for enterprise records management.

It will also ditch both AirWatch and Good Technology in favour of MobileIron for mobile device management.

Brugeaud’s team is tackling this rationalisation and simplification at the same time as the agency is working to restore its reputation as a technology leader globally.

Its continued use of the Morpho SmartGates implemented in 2007 for arrivals has caused it to lag behind global counterparts, Brugeaud said.

“Our ambition is to become the world leader again. In 2007 we were world leading, and we’ve progressively fallen behind for a number of reasons ,” he said.

“We’re now building a program that will allow us to leapfrog other countries globally.”

He highlighted opportunities in digital pre-registration - where declarations are filled in on a mobile device or airport kiosk - as well as human recognition systems that use sensors and biometric matching to identify an individual for screening.

His team will introduce a range of such technologies in its effort to get back on top.

Immigration's ability to play around with new border technologies will be enhanced should legislation currently up before the parliament be passed.

Late last week the federal government quietly slipped in a bill that would allow for passport-less border processing.

Under the proposed legislative changes, image matching technology would replace the paper document at airport SmartGates.

In its bill the government said it was planning to equip SmartGates with such "contactless technology" at major airports from May 2017. It forms part of Immigration's goal to be processing 90 percent of travellers electronically by 2020.