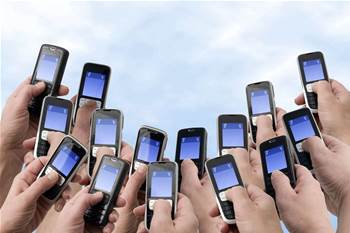 iiNet chief executive Michael Malone has downplayed the internet service provider's ambitions in the mobile market, despite almost doubling its mobile customer base in the past financial year.

Both iiNet and its newest subsidiary, Internode, have ramped up their mobile strategies, introducing subsidised handsets and high data caps for use on social media.

But Malone told iTnews the company would continue to use mobile as a bundled offering in the foreseeable future, selling services only to its existing broadband customers instead of chasing wholly new customers.

"It's just not on our radar at the moment," he said.

"Our customers are moving to mobile devices whether we want to stick our fingers in our ears or not, so being able to offer complementary products is becoming necessary.

"I'm not ruling [a mobile business] out [but] we are a fixed-line broadband provider. That's what we do."

Earlier this week, Optus chief country officer Paul O'Sullivan commented that a lower-value market in the mobile sector was pushing down average revenues per user and requiring telcos to chase higher-value customers instead of pure numbers.

Malone agreed, pointing to iiNet's strategy of chasing existing broadband customers as a higher-value proposition for the company because it removed the overheads usually associated with acquiring new customers.

"I'm sure from Optus' point of view, the fact that we only sell to our existing customer base is a plus for them because that's a base that is otherwise inaccessible for the most part," he said.

"We've got to get the offer right, different people have different buttons. We don't usually like to be cheapest on plans but with mobile, that's had to be the approach; we've got them for broadband but why are they going to go with us for mobile?"

Mobile bundling also forms part of iiNet's wider, long-established strategy of providing each customer with an average of three bundled products, up from 2.1 on average currently.

Its push to mobiles has fared better than iiNet's IPTV play, where the telco has only managed to attract 19,000 FetchTV and TransTV subscribers over the past two years.

"Five years ago, we used to watch this very carefully; there was no correlation between who people chose for their fixed line provider and who they chose for their mobile provider," he said.

"I think that's rapidly changing ... getting fixed phone and broadband together was always a nice thing to do and [provided] increased stickiness in the consumer base.

"But in an NBN world you've got to do it; you've got to get both of them together because otherwise the customer is going to be paying two sets of wholesale rates."

Malone told iTnews he hoped to get more serious about the mobile business but ruled out investing in significant mobile infrastructure in the short-term or participating in the forthcoming digital dividend spectrum auctions as a fourth player behind incumbents Telstra, Optus and Vodafone.

"I don't think Australia's got room for a fourth mobile network," he said, citing the telco's mobile carrier Optus as an ongoing, long-term partner for the company.

Instead, he suggested a smaller, single-city play like 2degrees in New Zealand, or a femtocell-based mobile network like that currently offered by BT in Britain, could become viable in the future.

"The technology is all very splintered at the moment but there's something coming over the next few years I think which will see the mobile devices and fixed line networks [work together]," he said.

"It's not viable long-term to have the enormous amounts of data that consumers are going to want to use on their devices and have that coming off the mobile networks. You need some sort of data offload."

Malone said he was disappointed in the growth of the FetchTV platform to date which, since launch two years ago, had managed to garner 10,000 subscribers across both iiNet and subsidiary Internode.

"It's exactly the same growth as we've had for the last two years in FetchTV, it's gone pretty consistently half-on-half ... I can't fathom myself why it's not taking off a lot faster," he said.

Although the platform is also being pushed by Optus, it has been unable to attract the same customer base as T-Box — which has 388,000 users — and core content rival Foxtel.

Malone partially blamed the lack of interest on a lack of understanding around the differences between FetchTV and Foxtel as well as an ongoing lock-out from exclusive content, despite attempts to gain a more even regulatory footing during Foxtel's merger with Austar.

"Longer term, content is the next battleground and the regulator recognised that as well," Malone said.

He said one option for the future was for Foxtel to provide greater wholesale access to its content.

The pay-television company has begun offering its content for Xbox 360 as well as through Samsung televisions, both of which are separate from the Telstra cable network it has typically been consigned to.

"Foxtel itself may surprise with some options — from their point of view, they don't really care how they get to market, as long as people are using their services," Malone argued.

"I guess from Foxtel's point of view maybe there's an option for them to do an over-the-top solution more broadly to customers.

"Today the pay TV market in Australia has less than 25 percent penetration. I'd like to think that if Foxtel was interested in offering wholesale access to their content we could get that penetration up significantly."

The fact that FetchTV already licensed some content from Foxtel shareholder PMG was a indicator, Malone argued, that "Foxtel and its related entities have shown their willingness to talk at times".

"We're in bed with Fetch and our gates stay in that but I think Fetch could license content from Foxtel, or from its associates," he said.