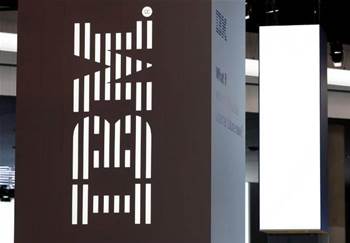 IBM reported a bigger-than-expected drop in revenue on Tuesday, hit by slowing software sales and wavering demand for mainframe servers, pointing to a bumpy recovery for the technology services giant that is in the midst of a turnaround.

Revenue at its systems unit, which includes mainframe servers and data storage systems sold to large organizations, climbed only 1 percent, compared with a 25 percent jump in the previous quarter.

Sales growth of z14 mainframe servers, introduced about a year ago, have slowed as customers await the launch of new machines before they upgrade.

IBM’s cognitive software business, which houses artificial intelligence platform Watson, analytics and cybersecurity services, had sales of US$4.15 billion, down 6 percent from a year earlier.

“We have a good pipeline in transaction processing software as we enter the fourth quarter,” he said.

IBM, which gets over 60 percent of its revenue from outside the US, said a stronger dollar also weighed on results.

The company said it made US$39.5 billion in revenue over the last 12 months from its “strategic imperatives” — high-growth businesses including cloud services that are spread across its divisions.

Overall revenue slipped to US$18.76 billion, missing analysts’ average estimate of US$19.10 billion, according to I/B/E/S data from Refinitiv.

Excluding one-time items, IBM earned US$3.42 per share, while analysts had expected US$3.40.

IBM shares were down 4.7 percent to US$138.29 in extended trading. The Dow component has fallen about 8 percent this year.