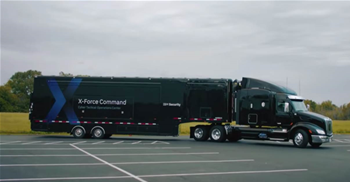 Takes training and response rig on the road.

IBM has refitted a semi-trailer to become a “cyber tactical operations centre” that it can use to train customers’ security teams or for mobile investigations.

In a video, IBM Security’s vice president of threat intelligence, Caleb Barlow, said the vendor had “learned a lot” in the two years since it built its first “fully immersive cyber security range”.

The cyber range was intended as a commercial training ground for security teams in how they would respond to an incident or breach, and about 2000 teams went through in those two years.

However, Barlow said the next step was to take that capability on the road, leading to the creation of the IBM X-Force command cyber tactical operations center (C-TOC).

Housed in a semi-trailer, it can be “configured as a cyber range, a sterile environment for running cyber investigations, or an onsite cyber watch floor for special security events”, IBM said.

“For our next generation cyber range we’re doing something very unique. We’re taking it on the road,” Barlow said.

“There’s an amazing thing that happens when you bring a team into a simulated environment that is so real they forget it’s not. The phones really ring, the data is actually real and the pressure is on.

“We start to see really quickly how those teams break down so part of what we want to accomplish with the cyber tactical operations centre is giving people the opportunity to simulate what it’s like to be in a large scale cyber security breach… and bringing that to a customer right where they are now.”

IBM also provided a detailed behind-the-scenes look at how it built the travelling C-TOC facility.

“Slide-outs on either side of the trailer expand the C-TOC to the width of three Humvees, to make room for the C-TOC's 18 workstations and giant video walls, for immersive training exercises and more,” the company said.