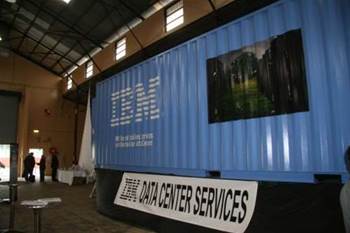 IBM has pitched its version of the portable modular data centre at Australia's resources sector, and claimed that it already boasted one third of the global market for this new style of enterprise computing.

Big Blue kicked off a demonstrator tour around Australia for its Portable Modular Data Centre (PMDC), which incorporated a full server room fit-out into a standard shipping container.

The system had already been shown off in Perth and was in Brisbane this week.

Brian Canney, offering manager for IBM's GTS Global Sites and Facilities Services division, said that IBM has sold 36 of the systems in 2010, and estimates that the total worldwide installed base across all suppliers (which include HP, Dell and others) is around 100 units.

IBM had already sold two of the PMDCs within Australia, with one Perth-based heavy equipment company installing two 20-foot systems and another container installed in Sydney.

Pricing for the systems typically varied between $500,000 and $3 million, although as each unit was individually configured, the vendor said price tags can vary widely.

Adam Farquhar from Nilsen, which was handling much of the local fit-out work for the centres, predicted that resources companies would be likely to adopt "copycat" behaviour in installing portable data centres locally.

"Once one door opens in the Bowen Basin or the Surat Basin, down the road you'll have another mining [company] that looks at that and says 'Let's get it on our site'. Word will filter out pretty quickly."

IBM has rented some of the centres for temporary data centre expansion, but Canney said that most clients were "choosing to purchase so they own the asset".

While IBM was heavily emphasising the configurability of the systems, it was forced to introduce six basic template designs after customers said they found starting with a blank slate too daunting.

The local portable data centre market has become highly competitive, with many operators planning to build centres based around modular technology.

Tier 5 is planning the build of an Adelaide data centre based on the format, GreenEdge Data claims to be building a facility in Melbourne, APC partner DataPod has rolled out systems in Canberra and Verb IT has already deployed a HP pod on the NSW Central Coast.

Disclosure: Angus Kidman travelled to Brisbane as a guest of IBM.