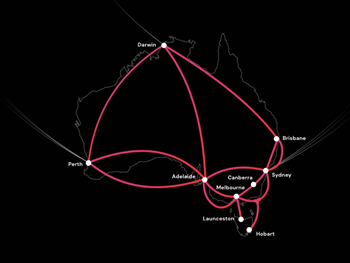 The massive project and investment was unveiled in the early hours of Thursday, and is described as “the largest private digital infrastructure project in Australia’s history”.

It includes the deployment of 20,000-plus kilometres of fibre “connecting major data hubs in every capital city in every state and territory across Australia.”

“HyperOne will also create new major interconnection points for more international undersea cables into Australia from Asia and as far as the Americas and Antarctica,” Slattery said in a statement.

The international interconnections appear to be slated for Darwin, Perth and Sydney, according to a map on the project’s website.

“With the current geopolitical instability in the region there is unprecedented  opportunity for Australia to become the region’s leading, secure and stable hub for future industries and jobs.”

Slattery said that the HyperOne transmission network would be “capable of carrying over 10,000 terabits per second – more traffic than every other national backbone built in Australia’s history combined.”

It would also have “more than 1000 ‘on-ramps’ in regional and remote Australia enabling underserved communities and remote areas a cost effective way to access HyperOne,” he said.

Slattery said that existing transmission networks had served the country well but “are nearing the end of their useful life and they were designed for a different time.”

“All the existing national transmission networks were built back when there was no Youtube, Netflix, social media, iPhones, or even cloud, let alone the future industries,” he said.

“They also didn’t address the digital divide in remote and regional Australia.

Slattery launched a website calling for expressions of interest to partner or work on the project.

“I want to see this project made by Australians for Australians,” he said.

The plan is already being welcomed by a broad cross-section of industry.