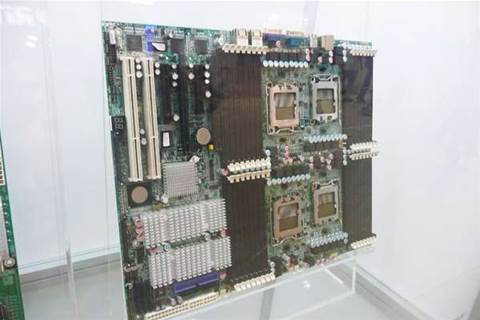 HP has unveiled its ProLiant BL2x220c G5 which contains the components for two separate servers in a single blade server unit..

The vendor said that the device is designed for applications such as cloud computing and web-based services which require large amounts of computing muscle with relatively low energy consumption.

HP claims that the new servers are up to 60 percent more efficient than other blade server offerings, and up to three times more dense than a comparable rack-mount server.

"Through innovations in server density, power efficiency, storage management and data centre services, we are committed to being the company that powers scale-out infrastructures."

The ProLiant BL2x220c G5 is part of a larger effort by HP to push its line of blade systems and other compact, energy efficient servers to high-performance markets and customers who are constantly adding new server systems.

HP credited this 'scale-out' market with boosting sales last month when an analyst report declared that the company had overtaken IBM to become the overall leader in server sales market share.

Got a news tip for our journalists? Share it with us anonymously here.
Copyright ©v3.co.uk
Tags:
hp in networking offers one proliant servers two