How Westpac NZ got the whole bank onboard DevOps 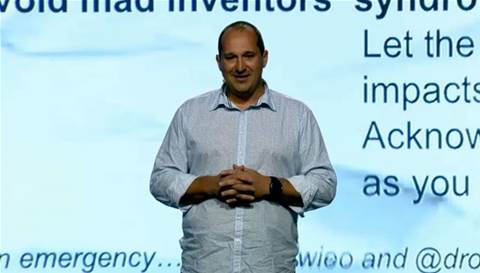 Getting ideas to customers faster.

Westpac New Zealand is in the midst of a major drive to get new software into banking customers’ hands faster, in part by weeding out unnecessary hurdles to the speed of deployment.

Speaking at ChefConf 2016, CIO Dawie Olivier said the bank was on a journey to increase the speed with which it could take an idea from the business, code it and then “ship” it to the customer.

“If you conceptualise big organisations as elephants, and you’re trying to teach elephants to dance, it doesn’t work to just change the music,” Olivier said.

“In the beginning of thinking through how we change the cadence of the organisation, the temptation to just go out and buy a tool was huge. That’s what banking executives do – we go out, we buy a tool and we expect miracles.

“But in going through the industry trying to figure out how that would work for us, we ran into the concept of supporting the tool with a transformation method and with the coaching and engineering support that you would need to make that tool work.”

The bank took on Chef automation tools, which are used to automate the configuration and management of IT infrastructure underpinning applications and workloads.

But Olivier was just as – if not more – focused on the culture of Westpac to accept the kind of speed he wanted to bring to the process of getting new products into the wild.

“All banks already have tech but what they don’t have is organisations that can actually deliver tech at velocity and that can in fact ship those ideas very quickly,” he said.

“My job is to take an old-style engineering shop and help it and teach it to act at velocity.”

Step one in that process was creating “fertile soil where people were willing” to hear him out.

“There’s absolutely no point trying to introduce a new product, a new tool or a new method into an organisation that frankly doesn’t care,” Olivier noted.

“The next thing - and it’s something that worked really well for us - is that we adopted a thing called the two product principle”.

The principle is part of a DevOps transformation practice that forms the basis of commercial services offered by Chef.

“Once you’ve got a culture in place where people are listening, you then have to build the technical practices, the methods, as well as the products in parallel to each other,” Olivier said.

“Adopting the two product principle [means] that any time we showcase, we have to showcase two things: we showcase the valuable thing that the customer is going to love, but secondly we showcase the engineering learnings that were garnered in the creation of that.

“What it means is that we get better at both of those things, and as the velocity picks up, those lessons become part of our engineering lore.”

To measure improvements in the speed that Westpac acted, Olivier created two measures: one that focused on culture and the level of engagement on the floor, and the second on efficiency.

“At the end of the day I’m a banking executive and I’m accountable for a budget,” Olivier said. “I have to prove that we’re getting better at things.”

Olivier said Westpac’s engagement scores were now in the top quartile of its measure – up from the lowest quartile when it began.

“The important part is how the conversations on the floor change; when you have people who are visibly walking around with smiles on their faces and are engaged in the work of creating value and outcome and they know what their part is, that’s when you start knowing that it changes,” he said.

The efficiency measure is driving further gains in speed by weeding out any part of internal processes that add no value to a finished product – for example, to getting a line of code into the hands of customers.

“To simplify it completely what we did is we said for every dollar that is thrown at a problem, how many cents in that dollar go towards solving that problem, and how many cents go towards hand-offs, waiting, talking, governance and overhead,” Olivier said.

“We started off at about 20c in the dollar, creating value. Now think about that - how could we look ourselves in the mirror and tell our shareholders that we were spending their money wisely if this was the kind of value that we were returning?

“In the space of about seven months that number has doubled and eventually almost tripled to the high 50s and we are trending upwards every single day as we hunt down those places and activities that don’t actually add value to creating outcomes.

“As we get closer to shortening the chain from the idea into the shipping, suddenly the waste disappears because such a process just doesn’t tolerate it.”

Part of driving that efficiency and speed into the process has been changing the way Westpac thinks about code.

“When you’re measuring your velocity and measuring your definition of ‘done’ as that time that your code goes into production, you’re missing a very important point - having a piece of code in production doesn’t mean that your customers actually have access to it and are touching it,” Olivier said.

“Once you start changing that around to actually measuring your velocity at the point where your customers touch it for the first time, there are a whole bunch of behaviours that change.

“Then, when everybody is accountable for the actual customer’s experience of your software as opposed to just getting it into production, suddenly we’re having conversations about whether the customer [can] actually take our change as quickly as we’re making it or should we be giving them new stuff quicker?”

That meant anything that acted as an internal block to getting new products to a customer would quickly remove itself.

“That’s how you keep the value chains and value streams honest because then any activity that doesn’t help you get value into that customer’s hands becomes something that needs to be hunted down in the streets,” Olivier said.