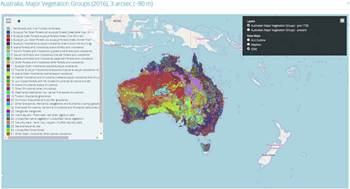 This area is a core target of the university's, but its ability to deliver timely and relevant resources had been hampered by challenges in managing and visualising massive climate-related data sets.

"Previously, the lines of inquiry into biodiversity and climate change impacts were stymied due to researchers inability to access a standardised set of tools for analysis and requisite data sources, and computational limitations," the university said.

Griffith knew there was big demand for accessible climate change research tools, but just how much demand has only now become clear following the launch of its biodiversity and climate change virtual laboratory (BCCVL).

The "one-stop modelling shop" is a massively scalable data management platform that consolidates a broad range of spatial data into an easily accessible interface.

Its mission is to "connect the research community to Australia’s national computation infrastructure by integrating a suite of tools in a coherent online environment where researchers can access data and perform data analysis and modelling".

The platform is built around four main software components: a Plone/Python data portal that utilises a distributed SWIFT Object Store within the multi-university NeCTAR Research Cloud; a Python-based data visualisation tool that displays map layers and data features; cloud infrastructure for running R based jobs on Celery, Python and Perl-based worker nodes; and a workflow engine that co-ordinates activities between the software stack using Rabbit and Celery.

Use of the NeCTAR Research Cloud gives developers access to a nationwide computing platform offering 400 server cores and approximately 1TB of RAM, allowing BCCVL users to develop and run complex modelling experiments across hundreds of layers of spatial data.

“It has established a new way for data providers to show value from their data, and makes biodiversity and climate impact modelling more accessible to a wider range of users, including those who otherwise would not have access to such large datasets and analytical tools," project manager Sarah Richmond said.

Its user base has already extended to include undergraduate students, early-career researchers, and other researchers at more than 300 institutions across the world.

These academics use BCCVL simulations to support their work analysing and proposing solutions to climate change issues, running complex simulations that would be impossible without NeCTAR’s massively scalable data processing resources.

Early cost benefits analysis by the Victoria Institute of Strategic Economic Studies (VISES) suggests the platform will be a significant net positive for the global climate change research community.

Researchers' ability to use the more sophisticated functions of the BCCVL has been buoyed by a multifaceted training program that teaches users the scientific and technical processes underpinning biodiversity modelling.

Training addresses areas such as digital skills, working in teams to compare and discuss modelling outcomes, and pitching research findings to potential managers or policy makers.

“The BCCVL has set a new benchmark by offering a way of working with large spatial data, and constructing and executing complex spatial models utilising cloud compute from a user-friendly interface,” Richmond said.

“Lowering the bar on accessibility raises the bar on establishing and educating about biodiversity and climate impact modelling principles, preparing students to be collaborative and productive in an increasingly digital workplace.”