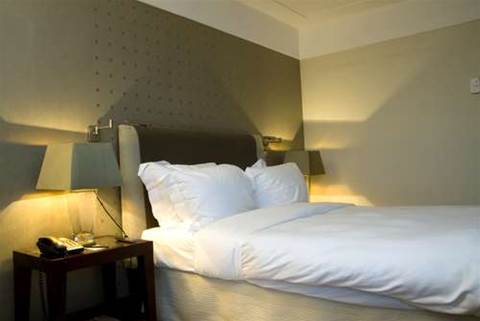 While pressures from the global financial crisis have eased, major hotel chains still aren't rushing to update in-room technology, and there's no immediate relief in sight for tech-starved travelers.

At a conference on hotel technology in Melbourne last week, hotel managers agreed that while business travelers are increasingly demand better quality Internet connections and the ability to connect mobile devices to in-room entertainment, coming up with the capital to fund those improvements remains difficult.

Stiff competition on rates and cutbacks on business travel have impacted the ability to upgrade hotel technology. Since 2009, new spending has been tightly curtailed.

"We were in boots and all we had $100 million going out in refurbishment across five hotels. Once you've started those refurbishments you've got to keep going," Eureka Funds Management managing director Nigel Greenway told attendees at the Hotel Operations Technology Conference.

"But we stopped that spend midway through 2009, and from that very point we put a lid on all CapEx. Although things are improving, we've still got a lid largely on CapEx. It'll stay until I feel good about it."

Eureka owns a portfolio of hotels which includes Four Seasons and Intercontinental-branded properties.

Hotel operators agreed that consumers have strong opinions about what technology should be available, especially in newer buildings.

"If you've got a new property and it's not meeting their connectivity needs... and you're not up to speed with what they need, they bounce to somewhere else," warned Paul Constantinou, chairman of Quest Serviced Apartments.

But while Quest opened 19 properties during the global recession, Constantinou said spending was affected at its existing sites.

"Where things have slowed down in some of the refurbishments are with the televisions, for example, but that's coming into play now."

Constantinou argued that skimping on Internet connectivity was a riskier proposition.

"Some of the older properties aren't wired correctly," he said. "There is guest feedback saying we can't keep using the [chain] because our employees need connectivity; you move pretty quickly to get those properties up to speed.

"It's all about bang for your buck at the end of the day," said Michael Shinton, chief financial officer for Asian Pacific Building Corporation.

"Everybody wants everything that opens and shuts, and you end up with a trade-off at the lower end of the scale. There's a little bit of romanticism around the technology sometimes, and at the end of the day it's about putting in the technology that your customers expect.

"You can turn people off by having too much technology in the room, in my opinion."