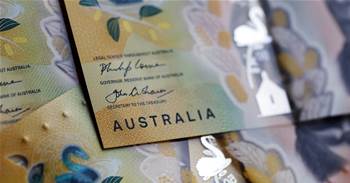 Counterfeiting has existed as long as there’s been goods and currency to copy, but new research into tech with potential applications in optical data storage is being touted as a solution for manufacturers.

A group of researchers from the universities of South Australia, Adelaide and UNSW Canberra suggest high density imaging technologies using phosphorous nanocrystals could be used in the finance and health industries to prevent counterfeiting.

“The phosphorous nanocrystals are unique in that they exhibit fluorescence that can be very efficiently switched on or off with a UV light,” said Dr Nicolas Riesen, lead author of the research paper.

Regions of crystals that have been activated by the UV light will then fluoresce red when exposed to blue light, whereas the unactivated regions will remain blank.

The benefit of this method, as opposed to other fluorescing techniques such as the ones already in use on a number of banknotes around the world, is that the nanocrystals can create images with ‘ultra-high-resolution’ in paper close to the theoretical upper limit of 25,000 dots per inch of 500 line pairs per millimetre.

Additionally, this method of authenticating products is relatively cheap in terms of materials, Riesen said, and the nanocrystals can be made without expensive chemicals.

The challenge, however, is in the application of the crystals.

“You would need specialised people and equipment to put those images on bank notes or consumer products, making it very difficult to counterfeit.

“Someone would have to be highly specialised to know how to do this, however once it’s been set up it’s highly repeatable.”

Riesen said this new method could be used to place small images on frequently ripped off items like banknotes or medical packaging that would be extremely difficult to forge and would be readable with a basic microscope and blue light.

The researchers were initially looked at other variants of the nanocrystals for using in optical data storage systems and x-ray dental imaging.

“We then realised that this platform could be used for creating arbitrary fluorescent images on 2D surfaces.

“This isn’t limited to bank notes either, for instance you could also use this technique for putting a stamp on different consumer products, for anti-counterfeiting purposes.

The Reserve Bank of Australia (RBA) typically receives around 30,000 counterfeits every year, at a rate of approximately 15 counterfeits per million genuine banknotes, with an estimated value of $1-2 million.

The RBA also recently revealed that, on top of sophisticated new technologies for forging banknotes and the complicated designs embedded within them, the distribution of counterfeit notes has also embraced digital solutions to broaden access to different markets while ensuring anonymity of the parties involved.

Meanwhile, the World Health Organization estimates up to a tenth of the global pharmaceutical market is counterfeit, costing companies billions.