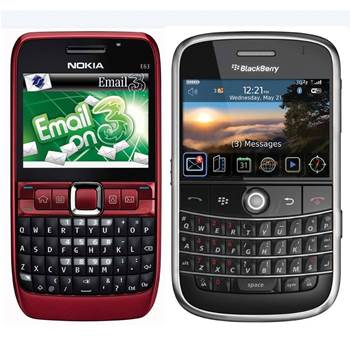 Is Nokia's new fleet of corporate-level devices likely to win over the 'pinstriped Blackberry army'? Natalie Apostolou spent a month with the two each of the vendor's top-selling corporate smartphones to see how they measure up.

The rise of the BlackBerry as the business weapon of choice in corporate corridors is facing an uprising from users demanding the handset move from its button\-down utility status to a multi-platform all rounder.

The game changing influence of the iPhone has meant that even the humble expectations of the no frills business set has lifted several notches.

Those users that have indulged in the Blackberry experience via generous corporate fleet deals have understandably succumbed to a slavish addiction to push email and 'always on' status next to your pillow. But the swift shift to applications rich handsets and a growing geek savvy-ness from the corporate user will create new challenges for the Canadian vendor.

Globally Research in Motion (RIM) continues to gain market share, 20 per cent up in the first quarter of 2009 and shifting 7.2 million phones, following the release of several models featuring wider consumer appeal.

But Nokia retains the top spot in terms of smartphone sales. According to Gartner, Nokia sold 15 million units in the first quarter yet suffered a decline in market share form 45 per cent to 41 per cent of the total market.

Nokia is now making an aggressive attempt to win over the pin-stripped BlackBerry army with a raft of enterprise savvy yet functionally rich offerings.

The Nokia E75 is a stand out evolution in the Finnish vendor's E -series offerings.

While a little heavier than a BlackBerry, its slim line form with a side-sliding QWERTY keyboard is a functional delight.

Connectivity-wise, the E75 supports the usual suspects HSDPA, Wi-Fi, GPS and Bluetooth. The classic Nokia intuitive interface means that one handed web browsing is a breeze.

Traditionally, BlackBerry aficionados have been hooked on RIM's seamless email functionality, while Nokia has come under fire for clunky email client support. But on the Symbian-based E75, Nokia has finally got the push formula right. From multiple account set up to execution the process is simple, and intuitive.

As a long time Nokia user I actually found the email client easier to navigate than the BlackBerry, and the E75 has the bonus of supporting ten private email accounts simultaneously and one exchange account.  Supporting both corporate email via Microsoft Office Outlook or Mail for Exchange and internet-based POP3 services including Google Mail and Yahoo! Mail it makes remote synciing and management of multiple accounts a breeze.

More importantly, the Nokia device also excels as being an actual phone! No matter how sophisticated BlackBerry's business applications become, the device can still be cumbersome to operate as a phone.

Nokia's devout belief in the integration of form and function means that the business user can truly rely on one handset for all their business and consumer needs. The E75 also comes installed with the expected E series organiser business apps functionality such as QuickOffice and Adobe PDF reader and is the first in the E-series to support N-Gage, Nokia's gaming platform, a guilty but often necessary business pleasure. IM is also supported.

Unlike the BlackBerry and a lot like an iPhone, the E75 also works best as a rich media and applications platform, again allowing the business user to conflate consumer needs with an enterprise based gadget.

The Nokia E63, meanwhile, is stylistically and visually a BlackBerry Curve doppelganger aimed squarely at winning over the BlackBerry brigade.

Priced a little cheaper than the average smartphone it does cut a few corners but not on features that would impact the core business user.

A lower-resolution two-megapixel camera for instance compared to the E75's 3.2 megapixels and while 3G enabled it does not support HSDPA.

Storage is handled via a microSDHC slot, which pushes users to use Nokia's proprietary Ovi file syncing service.

RIM's recently launched Blackberry Curve 8900 also boasts a 3.2 megapixels upgrade and features a maximum of 20 hours of video within its 16-GB MicroSD storage. Web browsing on the Curve is also an upgrade to the standard Blackberry fare with full HTML rendering.

In terms of office applications viewing Word, Excel and Powerpoint documents is seamless but trying to create them is a small torture - hampered by the keyboard and idiosyncratic shortcuts.

The Curve also supports Wi-Fi which puts it ahead of its predecessors but doesn't boast 3G connectivity.  It excels however, in features outside of the business basics including its camera and video recording capability.

Audio can often be muffled and again it is hard to get used to the BlackBerry as a primary phone handset, rather than just a super slick PDA.

If 3G connectivity is what you crave the BlackBerry Bold is a solid upgrade. The Bold also features better audio and video.

Both Blackberry devices boast RIM's unique algorithms for the smooth and data-efficient communication with the network, while communications can be secured behind the corporate firewall via the Blackberry Enterprise Server (BES).

BlackBerry users have long enjoyed the certainty of unlimited e-mail plans (such as BIS or BlackBerry Internet Services), offered in conjunction with data download packages that vary from carrier to carrier.

In response, Nokia has launched the Nokia Messaging Service, which includes SSL-encrypted push email, plus downloads from IMAP & POP email.

Already available pre-loaded on the E75 for 24 months, Nokia is planning to include this messaging service with operator data plans. However Nokia is still in discussions with local operators on pricing and details.

Nokia's commitment to merging its expertise in multi-media rich integration with a pure business phone is definitely upping the ante on business expectations. While Blackberry might be gaining market share in the consumer space, it will have to keep a close eye on its traditional market.

What do you think? Is Nokia a genuine threat to Blackberry in the enterprise?