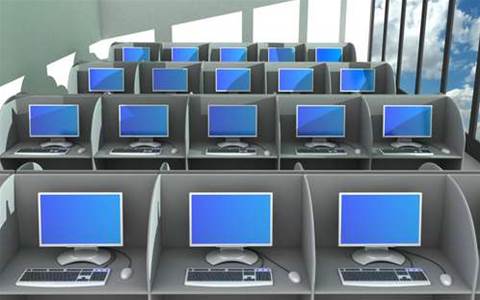 Western Australian health insurer HBF has upgraded its data centre infrastructure and will upgrade network links in coming weeks to support a new fleet of 650 thin clients across the enterprise.

Although the business was initially hesitant to centralise all desktop computing in its Perth CBD data centre, senior infrastructure engineer Colin Rutherford said feedback had been positive so far.

While the decommissioned desktops ranged from three to five years of age and took between one and two minutes to boot up, the thin clients, using VMware View 4.6, needed less than 20 seconds.

“Response has been great; we’ve had nothing but positive feedback to date,” Rutherford said.

“Across the business, start-up time improved significantly; staff are no longer waiting for [software] to load.”

According to Rutherford, a majority of HBF’s staff are now using virtual desktops, with only about 100 information technologists still using thick clients for more compute-intensive work.

Most thin client users are based in HBF's head office in Perth, and in two of the insurer's 19 member services centres that each have about 10 staff.

HBF’s VDI project was underpinned by a 2011 storage and server upgrade, for which it deployed six new servers and Hitachi’s Virtual Storage Platform (VSP) with another 55TB of capacity.

“While providing us with a better user experience, it [the VSP] allows us to react quicker to growth demands and provision storage more effectively.”

HBF’s new, tiered VSP capacity has been dedicated to new projects including virtual desktops, SQL clusters and the virtualisation of its Siebel customer relationship management and database environments.

Compute power for the 650 virtual desktops is provided by six VMware ESX 4.1 hosts on IBM 3850 X5 servers, with 256 GB of RAM and four eight-core CPUs.

HBF has a total of 90 physical servers, an IBM mainframe and 260 virtual servers across 11 VMWare ESX hosts in its Perth CBD data centre.

“Because of an ageing desktop fleet and its associated replacement costs, desktop administration costs/overheads and the ability to utilise some of our current infrastructure for the project, the outlay on new server and storage infrastructure was feasible," Rutherford said.

“The reduction in power consumption achieved from the thin clients was also a big draw card.”

HBF is in the process of upgrading 2MB BDSL connections between its CBD headquarters and 19 service centres to 4MB and 10MB Telstra MAN/WAN IP services with 3G backup.

Links to two of those centres have been upgraded, and virtual desktops deployed. Rutherford said thin clients would be issued to the remaining 17 centres as they received the new network links.

He said the business recognised that the additional bandwidth would boost performance and end-user experience at the service centres.

“This ultimately translates into customer experience for our members,” he said.

Rutherford said the insurer had put a major emphasis on redundancy in its data centre in the absence of disaster recovery functionality for its virtual desktops.

He said the business planned to have a VDI disaster recovery plan in place and tested by the end of the year, so that key business users and customer service staff could quickly fail over to alternative systems should disaster strike.

“We take every necessary precaution and have a huge emphasis on redundancy in our data centre so that there is little to no chance of failure,” Rutherford said.