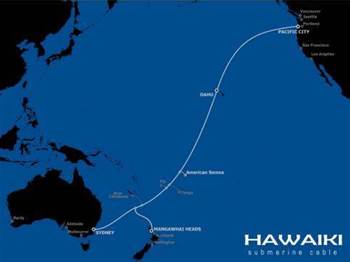 Connecting Australia to the US.

Hawaiki has completed laying its 15,000km undersea fibre optic cable that connects Australia and New Zealand directly to the US.

Hawaiki CEO Remi Galasso said the US$300 million (A$407.2 million) cable system will provide the “fastest and the largest” link between Australia and the US, with another branch connecting American Samoa.

Hawaiki has also installed branching units, with plans to expand the network to other Pacific nations, including Tonga, Fiji and French territory New Caledonia.

The cable was built to transmit data at 43.8Tbps, but Hawaiki director Malcolm Dick said that there's room to expand that capacity in the future as faster technology is built onto the endpoints of the network.

He said the cable's capacity is 80,000 times that of satellite links currently available in the region.

“It is a mind boggling number, it’s sufficient to download 1200 high definition videos a second, so it’s enough for Australia and New Zealand for the conceivable future,” said Dick.

TE SubCom, who laid the cable, will maintain the link during its 25-year lifespan.

The cable lands at Sydney’s Coogee beach and connects to the Australian network via Equinix’s SY4 data centre.

“It will bring more connectivity, diversity and competition to the market,” said Galasso.