Has the cloud bubble burst? 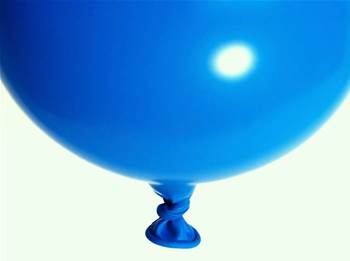 The 2011 study of 100 Australian CIOs and enterprise IT buyers, prepared for the third consecutive year, found CIOs 20 percent less likely to invest in cloud services today than the same time last year.

Fewer of these decision makers said they were consuming cloud computing services in 2011 compared to 2010, suggesting that some CIOs may have even brought workloads back in-house.

Only 24 percent of respondents said their organisations were consuming software-as-a-service (SaaS), down from 34 percent in 2010.

Fourteen percent were ‘in planning’ for SaaS adoption, down from 44 percent, suggesting that other priorities had come to the fore.

Intentions to consume infrastructure-as-a-service (IaaS) remained fairly flat, with more considering or planning than actually signing up for services.

The only major change in CIOs' stated intentions was that they were more likely to seek control of their infrastructure via adoption of ‘hybrid’ or ‘private’ cloud architecture, and were 18 percent less likely to adopt an Amazon-style public cloud.

The findings were in stark contrast to what the same group of buyers indicated in 2010, when Longhaus pitched latent demand from organsations for SaaS at 95 percent and IaaS at 68 percent.

In 2010, the vendors were “pregnant with expectation”, Longhaus research director Scott Stewart said.

“The window of opportunity for mass cloud adoption had arrived, and the market was going to move quickly. Cloud hype was at full volume.”

Stewart surmised that brochures for cloud computing services had presented a “myopic” impression of a “quick win” to reduce IT costs.

But on further analysis, the model presented little value for those large enterprises struggling to manage a 30 year legacy of infrastructure and applications.

Stewart said a typical enterprise with many hundreds of solutions and data silos, each interconnected by legacy integration code and deeply embedded business rules, workflows and business processes, doesn't make for an ideal cloud customer.

"If an enterprise has 140 systems to supports its operations and you decide to move one to a SaaS, this can break a lot of integration and it requires some planning," he said.

He acknowledged that the reported drop in SaaS adoption might represent those enterprise IT shops that had taken up free trials of SaaS applications but opted against full-scale adoption.

Further, Stewart said some sales teams might have signed up for a suite like Salesforce.com because they “want something today”, only to create "another silo the CIO then has to deal with". 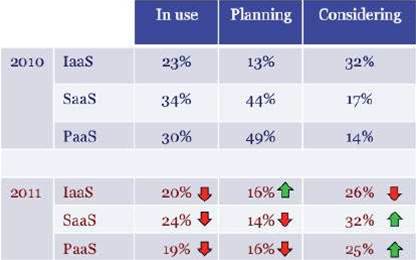 Source: A sample from Longhaus' study

CIOs were concerned about data sovereignty, he said, but also service reliability after a series of major well-publicised outages.

Neither Amazon’s AWS, Google Docs, Microsoft's Azure and Office365 or Salesforce.com have lived up to enterprise expectations thus far.

"The recent cloud outages will change the dynamic for enterprise CIOs," Stewart said.

"They will become far more interested in how well these clouds are being run. We need to see much more investment in service management, service assurance and security.

“The cloud bubble is bursting."

What do you think? Have data sovereignty concerns or outages sullied your view of cloud computing?