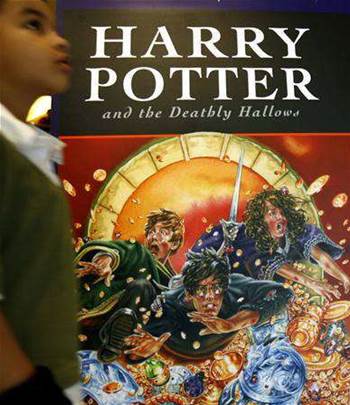 The Harry Potter books have spawned a parallel universe on the Internet, where sites attract millions of fans every day and play a major part in the success of the novels and their Hollywood adaptations.

So popular are J.K. Rowling's stories, and the Web pages built around them, that a handful of online fans have become stars in their own right.

Arguably the biggest is Emerson Spartz, who was just 12 when he set up www.mugglenet.com. Today the site is visited up to 40 million times a month, making it one of the biggest Potter sites in the world and a viable commercial venture.

"I spent the entire summer on the road signing thousands of autographs, which is simply unheard of for a geeky kid who created a Web site," he told Reuters by telephone from the United States, where he is a university student.

"Harry Potter has got to a point where it is so popular that even fans have fans," the 20-year-old added.

"Pottermania" has never been more intense ahead of the publication on Saturday of "Harry Potter and the Deathly Hallows", the seventh and final instalment of a series that has already sold 325 million copies worldwide.

Melissa Anelli is "webmistress" of another top Potter site, www.the-leaky-cauldron.org. She believes the online world has a role to play particularly during gaps between Potter books.

"There are sometimes years between films and books, and through this interaction the hype is never-ending. We keep the fun going in between."

Both say a key to their success is the relationship with Warner Bros., the studio that makes the hit Harry Potter movie franchise.

Initially "antagonistic" towards fan sites, according to Spartz, Warner eventually realised their influence and reach.

What happens to the Harry Potter's virtual world once the seventh book is out is unclear, though Spartz and Anelli expect their sites to thrive until the 2010 release of the final film. After that, their popularity is bound to fade, Spartz added.

Rowling has long recognised the power of the Internet.

Her own Web site, www.jkrowling.com, boasts up to seven million hits every day and Spartz and Anelli were invited in 2005 to hold a rare interview with her.

The author also publicly backed The Leaky Cauldron's campaign to prevent spoilers appearing on the Internet ahead of the launch of "Deathly Hallows", which will answer the question on ever Potter fan's lips -- which characters will die?

One hacker claims to have leaked key plot details on to the Internet after breaking into a computer at Rowling's British publisher Bloomsbury.

Reuters has also seen online photographs purporting to be the last pages of book seven, which, if genuine, provide the answers to the biggest secrets of all.

As well as regular fan sites, there are others where fans let their imaginations run wild with Potter novels of their own.

Tens of thousands of alternative Potter stories have been written, some of them favourably compared to the originals.

"Harry Potter and the Secret Horcrux", written by "Logical Raven" on the Web site www.harrypotterfanfiction.com, is already 27 chapters long, and the writing, according to the Sunday Telegraph, is "sharper than that of his mentor.

"In fact it is quite possibly because her own style is so bland that her readers feel able to play with her characters," writes Telegraph critic and author Frances Wilson.