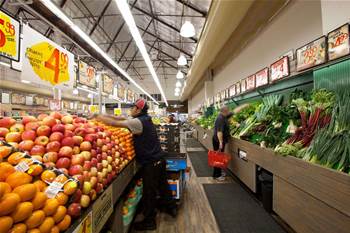 Family-owned Harris Farm Markets has kicked off an IT infrastructure upgrade as it extends its year-old enterprise resource planning system and looks to sell groceries online.

The grocery chain has spent the past year customising a Microsoft Dynamics Nav ERP platform, after a three-year, $2.8 million effort to switch it on in July last year.

Chief information officer Simon Maizels said the ERP project was the “turning point” that sparked an “evolution of the business and business capability” within Harris Farm.

“They [the owners] want more,” he said. “Technology has matured to the point where systems that used to cost millions, you can now get for $100,000.”

The new infrastructure supplements some 10 TB of existing space and introduces “real-time data compression” technology designed to boost storage capacity by 50 to 80 percent.

“We were running out of space and back-ups were failing,” Maizels told iTnews, explaining that Harris Farm had added new automatic stock replenishment, pricing and promotions systems to the ERP platform in the past year.

The new systems have allowed Harris Farm to perform tasks like price changes centrally, freeing up staff in its 23 branches to focus on the quality of produce and customer service.

In recent months, Harris Farm has also begun allowing customers in Orange, Mudgee, Dubbo and Sofala to order groceries online and arrange delivery to their homes.

Maizels hoped to extend that functionality to Sydney residents in the coming year, noting that Harris Farm had begun scoping out its requirements for an off-the-shelf e-commerce system.

Harris Farm expected the new IBM infrastructure to support its growth for the coming decade, with business intelligence a key focus of the near future.

“We’ve started to use business intelligence to look at our product range,” said Maizels, who leads an IT team of eight, including four operations staff, a Dynamics Nav expert and a data warehousing expert.

“Three months ago … we identified 1500 products that really weren’t selling so we culled them. That’s just the tip of the iceberg.”