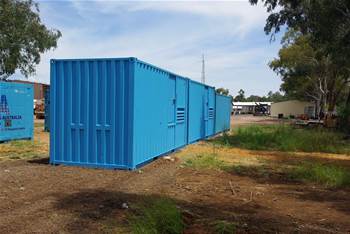 The vendor behind Australia's "first Wi-Fi town" has revealed a $49 starting price for its wireless service to local residents.

But visitors to the town will be limited to 10MB of internet use per day over the network, despite tourism being a core tenet of the original business case to the town's council.

Instead, TUPS - which provides the service - intends to rely on cached data from the council and local businesses along with a proprietary search engine to relieve any stress on external use.

The wireless service was switched on last month in the regional New South Wales town of Gunnedah after one year of planning and construction.

Under the plans, released publicly on Thursday, local residents would be able to choose from five plans ranging from $49 for 3GB of data to $119 per month for 20GB of external data quota and 2GB of storage cache.

They will be contracted for 24 months, or can pay a $250 installation fee to receive a year-long contract.

Each plan also includes a set amount of storage held in the portable data centres in Gunnedah, which act as hubs for the wireless service, with data also replicated at TUPS' Mona Vale-base data centre in Sydney.

Access to content on the caching service is unlimited for both contracted users and visitors to the town, allowing them to visit business websites and other tourism information over the wireless connection.

The wireless service relies on point-to-point 802.11 technology, much like what is deployed for impromptu IT infrastructure setups at music festivals and outdoor events.

Portable data centres, housed in shipping containers, have been deployed by TUPS on the fringe of the town over the past year to provide the caching storage service, switching equipment and connections to the Telstra fibre backhaul supporting internet connectivity.

TUPS uses a mix of licensed and unlicensed (such as 2.4GHz) spectrum to provide point-to-point wireless connections to residents and businesses at speeds of between 20 Mbps and 300 Mbps.

The service could extend up to 15km on the point-to-point service to surrounding towns.

At least five wireless antennae had also been deployed throughout the town after council consultation to provide a general wireless broadcast to visitors in the town's main street.

The containers also serve as a data warehouse for caching websites and other information from local businesses and residents on the vendor's local intranet.

TUPS ultimately hopes to build a cache of local content big enough to provide sufficient information between the council and residents, or for education and health purposes.

Interest but no NBN

Since launch, TUPS had signed up five businesses and four residential customers, who were mainly forfeiting ADSL accounts or mobile broadband plans in favour of the point-to-point service.

The council's manager of economic development and tourism, Chris Frend, told iTnews the service had receive "quite a strong level of interest" from locals.

The council is currently in negotiations with TUPS to sign up for its own needs.

Though at times pointed as a replacement for the National Broadband Network by the town council and mainstream media, TUPS manging director Geoff Peach maintained distance from the claims.

"We are not competing with the NBN roll-out," he said.

"We do not tell people that Wi-Fi is as fast as optical fibre. We are simply facilitating an access capability to a user community that has limited, or no other method of connecting to a reasonable service and will not have one for the foreseeable future.

"If the NBN comes to Gunnedah, we can simply be another retailer."

Given Gunnedah has more than 1000 premises, it is likely to receive fibre connections as part of the NBN rollout. However, it has not yet been named as a location for the network's construction over the next year.