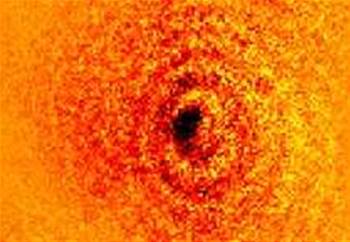 Griffith University researchers have photographed the shadow of a single atom for the first time, saying the breakthrough "may be useful for quantum computing".

The photograph is the result of five years of research run out of the University's Centre for Quantum Dynamics.

The research was published in the latest edition of scientific journal Nature.

"We wanted to investigate how few atoms are required to cast a shadow and we proved it takes just one," Professor Dave Kielpinski said in a statement.

The researchers used a super high-resolution microscope, "which makes the shadow dark enough to see".

Researchers trapped single atomic ions of Ytterbium and "exposed them to a specific frequency of light".

"If we change the frequency of the light we shine on the atom by just one part in a billion, the image can no longer be seen," Professor Kielpinski noted.

Fellow researcher Erik Streed expanded on the potential benefits for quantum computing in a post to The Conversation.

"In quantum computing, light is the most effective method for communication, while atoms are often better for performing calculations," he said.

"In observing the shadow from a single atom we have shown how to improve the input efficiency in a quantum computer."