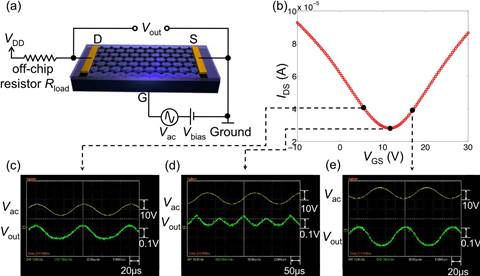 US researchers have built and tested a graphene amplifier that could improve future Bluetooth, radiofrequency identification (RFID) and other wireless devices.

The team claimed to be the first to demonstrate a triple-mode, single-transistor amplifier that was based on graphene and had greater functionality than conventional semiconductor devices.

Graphene is a one-atom-thick sheet of carbon that conducts electricity 100 times faster than silicon and won its discoverers a Nobel Prize in Physics this year.

The amplifier exploited the graphene's ambipolar nature - its ability to reactively use either negative or positive electric carriers, depending on the input signal.

According to the researchers, ambipolarity increased the functionality of a graphene transistor as it allowed current to flow in either direction, and could also act as frequency multiplier.

"This is different to conventional semiconductors, where the type of carrier is pre-determined by the doping during the device fabrication," University of California, Riverside professor Alexander Balandin told iTnews.

"Graphene amplifiers can lead to simpler and faster circuits and chips, smaller in size, and lower in energy consumption. The amplifiers can be used in Bluetooth, cell phone and other applications."

Balandin's research group joined collaborators at Rice University to build the graphene amplifiers six months ago, after having worked on graphene transistors for two-and-a-half years.

In a research paper published in ACS Nano this month, the researchers noted that the amplifier would greatly simplify phase shift keying and frequency shift keying modulation techniques that were used in wireless and radio communications.

Balandin said graphene would be used in touch screens and in flexible electronics as soon as next year, and as heat spreaders in chips within five years.

"Graphene is likely to make it to analogue and communication electronics within a decade," he predicted.