Govt held back by 'triangle of despair': Shetler 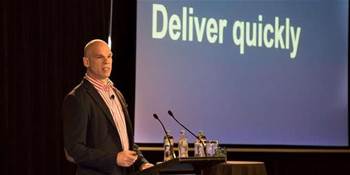 Ex-digital guru diagnoses the illness within.

Bureaucracies like Canberra are suffering from a "triangle of despair" blocking them from adapting to the digital ways of the 21st century, according to the federal government’s former digital guru Paul Shetler.

Despite departing the public sector amidst a very visible spat with Assistant Minister for Digital Transformation Angus Taylor, Shetler has continued to tout his digital mantras down under.

"[Digital transformation] can be a very painful experience," he told the audience at Sydney’s CDO Summit yesterday.

"I can tell you that because I know from experience."

Shetler argued that all complex organisations - such as his former employers, the UK and Australian governments - can be hamstrung by three "fiendish" elements conspiring to block digital change: inappropriate procurement, inappropriate governance, and ancient IT.

He said government buying is based on the outdated economics of big capital expenditure.

"This means putting everything up for tender and expecting a tenderer to take care of everything for you. Or waiting six months to bring in talent for a job that lasts all of eight weeks."

The digital marketplace - a portal where hundreds of digital firms can respond quickly to agency briefs - was one way the Digital Transformation Agency tried to ease Canberra out of this mould.

Shetler also argued that government needs to inject skills back into its agencies to avoid spreading accountability across lots of people to the point that "no-one can really be held responsible".

Governance in government can be a “huge pain” especially when officials can’t let go of their PRINCE2 toolset and try to layer agile principles on top, he said.

The former digital chief laid some of the overall blame on legacy IT systems that "really don’t take into account anything that has happened with the internet in the past 15 years", and which are controlled by impenetrable layers of contracts with integrators and outsourcers.

“Each side of the triangle reinforces the paralysis that is induced by the other two,” he said.

“And these three things all draw their sustenance from a really heavily deskilled workforce."

But he also reserved criticism for digital evangelists, warning against “digital cultism” that can alienate the traditional elements of the bureaucracy that have little to no understanding of the circumstances that have got them to the present day.

However, speaking at the same conference, NSW government CIDO Damon Rees - who made the switch from private to public sector mid-last year - was much more optimistic about the government’s capacity for change.

"We tend to read more articles that say government can’t and won’t change, than we can and we are. But my experience is that government is moving very rapidly in some areas," Rees said.

"In almost everywhere you can think of there are pockets of good work."