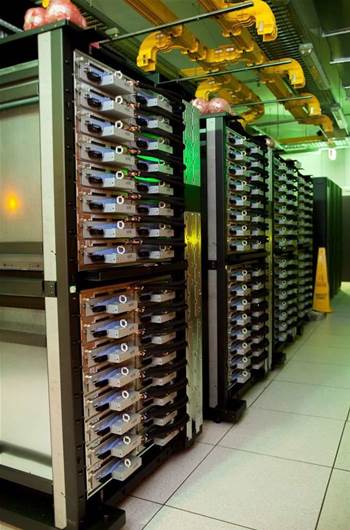 As original VLSCI funding dries up.

Victoria’s life sciences supercomputer will continue to operate for another two years, thanks to a $6.65 million funding top-up from the state government following the expiry of its original grant term.

The Victorian Life Sciences Computation Initiative (VLSCI) is touted as the world’s largest computational facility dedicated to biological and health studies. It was kicked off in 2009 thanks to $50 million in start-up capital from the government, matched by another $50 million worth of private and research sector contributions.

But after five years, the $50 million government funding will dry up at the end of 2014, Director of the VLSCI, Professor Peter R Taylor told iTnews.

A spokesman for Technology Minister Gordon Rich-Phillips said the new money will “enable the program to run for another two years”.

“Victorian Government funding support for the VLSCI is an important component of our continued focus on developing strong and vibrant health and biotechnology sectors,” Gordon Rich-Phillips said in a statement this morning.

“Victoria’s life sciences-related businesses will now have greater access to the world’s most advanced life sciences research facilities, enabling them to tap into the expertise of our leading computational biologists to help grow and improve their businesses,” he said.

However, beyond 2016 the facility’s future is not so secure.

“We continue to approach both Victorian and Federal Governments and other stakeholders to assist us in the long term viability of the facility,” explained Taylor.

“In this way we hope to ensure that Victorian and Australian industries are well-placed to compete in the fast-paced world of personalised medicine, cancer genomics and biomedical imaging and to meet the complex challenges facing the agri-bio sector,” he said.

The VLSCI is central to an Australian-based study into bending light to make objects ‘invisible’, being led by Deakin University’s Tiffany Walsh for the US Air Force.

Earlier this year Walsh told iTnews that the power of the VLSCI was critical to her decision to undertake the research in Australia.

The VLSCI is one of a number of supercomputing projects in Australia currently funded under one-off grants, which had led for some to call for a more strategic, rolling fund to ensure Australia's investment in high performance computing is spent more efficiently.