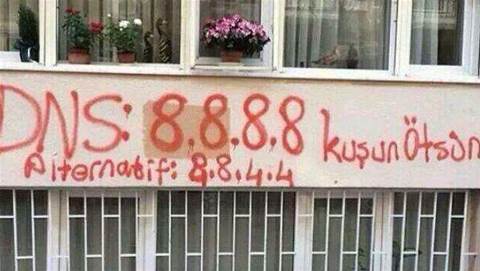 Turkish demonstrators advising people to use Google's free public DNS to get around the government imposed internet blackout. Source: unknown.

Around 10pm AEST, users at the Whirlpool forum reported problems with reaching the Google DNS resolvers at the 8.8.8.8 and 8.8.4.4 Internet Protocol (IP) addresses and complained of experiencing packet loss.

The outage was confirmed by Yunhong Gu, the team lead of Google's public DNS, who said the service was off-air for around half an hour at 1100 hours UTC.

Gu did not say what caused the problem, but a source at an Internet provider said traffic to the Google DNS servers took unusual long routes, going via Sydney to the United States, which in turn suggests a configuration change was being rolled out.

Google's free to use public DNS service is used by a large number of organisations. In March last year, the company boasted that it served replies to 130 billion queries on average, peaking at 150 billion, from more than 70 millon unique IP addresses.

Just over a year ago, Google's DNS service dropped out worldwide, causing web site loading to time out, as users' systems were unable to translate domain names into IP addresses.

The public DNS service was briefly also rerouted in March this year, thanks to a configuration mistake by telco BT's South American subsidiary.

Around the same time, Google also encountered an unspecified and unrelated issue when its Apps admin console refreshed continuously on loading.

That problem lasted about an hour, with Google apologising to Apps users for the inconvenience and assuring them that system reliability is a top priority at the web services provider.