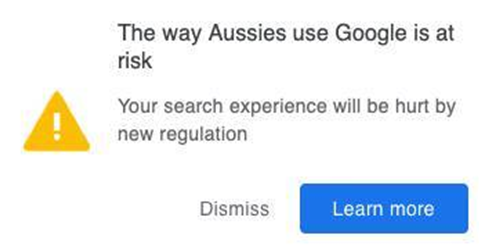 Google is warning its Australian search platform users of “dramatically worse” online experiences and the possible end to free services if the country’s media bargaining code is introduced as-is.

Using a pop up window in Google Search, the web giant this week started directing users to an open letter that claims ‘the way Aussies use Google is at risk’ from the proposed regulation.

“We need to let you know about new government regulation that will hurt how Australians use Google Search and YouTube,” the open letter from Google's local chief Mel Silva states.

“A proposed law, the news media bargaining code, would force us to provide you with a dramatically worse Google Search and YouTube, could lead to your data being handed over to big news businesses, and would put the free services you use at risk in Australia.”

Initially limited to Google and Facebook, the new regulation would also introduce a number of enforceable standards, including advanced notice of any “significant algorithm changes”.

Google was quick to rebuke the proposed changes last month, with Silva suggesting that the “heavy handed intervention” would impact its service delivery.

But with the open letter, the search giant is now using its best asset to push its perspective.

Google said the proposed laws would force it to give an “unfair advantage” to new media, which means it could no longer guarantee that users see “what’s most relevant and helpful”.

“News media businesses alone would be given information that would help them artificially inflate their ranking over everyone else, even when someone else provides a better result,” it said.

“The proposed changes are not fair and they mean that Google Search results and YouTube will be worse for you.”

The letter also takes issue with the ability for media organisations to be able to bargain, either individually or collectively, with Google over payment.

Google said this is “set up to give big media companies special treatment and to encourage them to make enormous and unreasonable demands that would put our free services at risk”.

“We’re going to do everything we possibly can to get this proposal changed so we can protect how Search and YouTube work for you in Australia and continue to build constructive partnerships with news media businesses — not choose one over the other,” it said.

It said it already pays news media “millions of dollars and send them billions of free clicks every year”.

Google also used the letter to suggest that users “search data may be at risk”, despite the code making clear there is no requirement for “platforms to increase sharing of users data”.

“Under this law, Google has to tell news media businesses ‘how they can gain access’ to data about your use of our products,” it said.

“There’s no way of knowing if any data handed over would be protected, or how it might be used by news media businesses.”