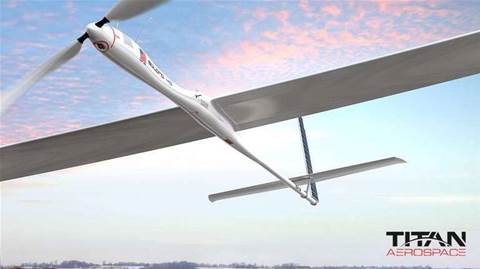 Titan CEO Vern Raburn declined to provide information on the price of the deal, which he said closed today.

The 20-person company will remain in New Mexico for the foreseeable future, Raburn said, with all employees joining Google.

"Atmospheric satellites could help bring internet access to millions of people, and help solve other problems, including disaster relief and environmental damage like deforestation," Google said in statement today regarding the Titan acquisition.

Google's purchase of Titan comes several weeks after Facebook announced plans to build solar-powered drones and satellites capable of beaming internet access to underdeveloped parts of the world. Facebook had previously been reported to be in discussions to acquire Titan.

Titan is developing a variety of solar-powered "atmospheric satellites," according to the company's website, with initial commercial operations slated for 2015. The drones, which fly at an altitude of 65,000 feet and can remain aloft for up to five years and have a 165 foot (50 metre) wingspan, slightly shorter than that of a Boeing 777.