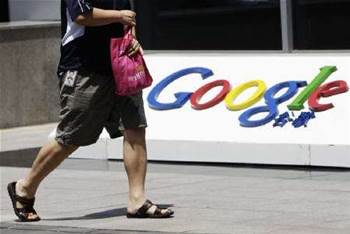 Google is introducing a credit card for its advertising customers, offering its clients a credit line to try and drum up business as competition in the online ad market heats up.

Google is offering the card to select US clients with what it calls a competitive interest rate, an ample credit line and no annual fee.

The catch: it can only be used to buy search advertising on the world's No.1 Internet search engine.

The AdWords Business credit card marks Google's first foray into the world of vendor financing, common among hardware makers such as IBM.

It lets marketers spend more on its search ads when the need arises.

Claire Johnson, vice president of global online sales at Google, said the credit card was designed to help small and medium-sized businesses that advertise on Google but who often don't have the funds to support a heavy ad campaign ahead of a big sales season, such as Valentine's day or Halloween.

"They are resource-constrained and they are often cash flow-strapped. Many of them are trying to grow a business without the kind of means that, say, your classic company has," she said.

Some retailers that own their own credit card operations can also earn some interest income.

Google will email invitations offering the credit card to some of its customers on Wednesday. The card will initially be available as a "beta" test, available to select users.

Google makes 96 percent of its revenue from advertising, the vast majority of which comes from the small ads that appear alongside its search results, known as AdWords.

But its business faces rising competition from a search alliance between Microsoft and Yahoo, as well as from social networking service Facebook, which is becoming popular with small and large advertisers alike.

The AdWords card is a MasterCard that will be issued through the World Financial Capital Bank. The card's 8.99 percent annual percentage rate is the ongoing rate, and not an introductory rate, Google said.

Google is keeping quiet on many of the other details, including the minimum and maximum credit lines available (Google says it will vary by cardholder) and the number of people to whom the card will be offered.

Brent Callinicos, Google's Treasurer, said that the credit card will be offered to a "statistically significant" number of people as Google examines the results of how availability of the card affects customer spending behavior.

"Even though (availability) will skew towards the smaller businesses, obviously we want to cast a wide enough net so we can see what resonates depending on your historical monthly spend," said Callinicos.

Google will evaluate customers' creditworthiness through a combination of internal efforts and with the help of a financial partner, he said.

The effort to offer a credit card comes as Google's cash pile continues to grow, reaching $US39.1 billion in cash and marketable securities as of June 30. Google does not pay a dividend or participate in any ongoing share repurchase program.

"Obviously we have a robust balance sheet, so this is a way for us to use that balance sheet to help our customers," Callinicos said.

But he stressed that the main motive for the card was to provide loans to Google customers in an economic environment in which getting credit can be tough.

"It isn't a financial engineering project that we came up with and said this would be cool to do. It's a customer need," he said.

One popular perk missing from Google's credit card is the ability to rack up airline miles with purchases. But Callinicos said he did not think the omission will hurt the card's appeal.