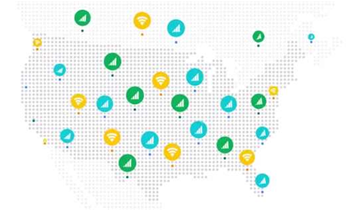 Google today launched a new US wireless service that switches between wi-fi and cellular networks to curb data use and keep phone bills low.

The service, Google's first entry into the wireless industry, will work only on the company's Nexus 6 phones. It is hosted through Sprint and T-Mobile's networks, Google said in a statement.

The service, called Project Fi, will automatically switch between the two networks and more than 1 million open, free wi-fi spots, depending on which signal is strongest.

The service will cost US$20 a month plus US$10 per gigabyte of data used. Customers will get money back for unused data.

Sundar Pichai, Google's senior vice president of products, last month said the company was preparing to experiment with a mobile network, but that it did not intend to disrupt the wireless industry.

The service will be available on only one device and has limited carrier coverage, so it will not make Google a major wireless industry player, according to Brian Blau, research director at Gartner.

If successful, however, Google's service could pressure wireless providers to further lower prices and better adapt to the rise of tablets and wearable devices, Blau said.

Though some US carriers, such as T-Mobile and AT&T, allow unused data to roll over, most mobile plans require customers to pay for a set amount of data each month.

But Google first has to "test out features they think are going to differentiate themselves," Blau said, such as being able to transition from network connectivity to wi-fi.

If Google is able to provide those features, "it's very possible they could become a major wireless player in the future," Blau said.

Google shares rose 1.27 percent to US$549.81 following the announcement.