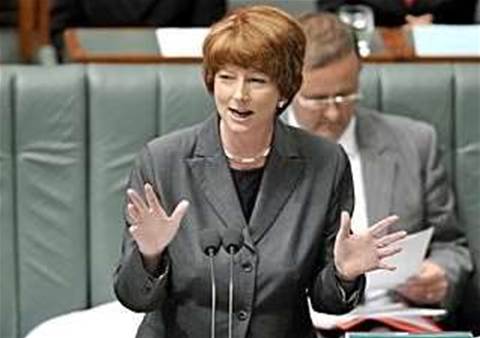 Gillard addressed a throng of media at midday in front of Parliament House in Canberra.

It followed an earlier visit to the Governor-General Quentin Bryce's residence in nearby Yarralumla, tracked closely by TV news crews.

Gillard encouraged voters to enrol before the cutoff on Monday at 8pm, particularly those for whom this would be their first election.

"We believe young people are interested in the future of the country going forward," Gillard said.

"Young people will be particularly interested in our plans to keep building the National Broadband Network, something that would be lost under a Liberal government."

The phrase forms a key part of the Government's campaign platform. The Australian Labor Party is accusing the Liberals of looking backwards in their campaign approach - for example, their decision to can projects including the NBN and computers for schools.

Gillard's speech was short on policy detail, although she committed not to run a high-spending campaign.

He said the election "is about giving a great people a better government."

"The only way to change for the better is to change the Government," Abbott said, repeating the phrase to emphasize it.

"Three weeks ago the Government had lost its way and since then it's just got worse.

Abbott said he was determined to win the election. He said if the Coalition won, it would "make the Government tighten its belt".

He argued that Gillard wanted to "move forward because the recent past is littered with her own failures".

"We'll end the waste, repay the debt, stop the taxes and stop the boats," Abbott said.

In other breaking news, Pirate Party Australia have revealed they will not be able to contest the Federal election.

In a statement, a party spokesman said it was "with some regret that we must announce that we will not be able to contest this election as a party.

"Our application to register is before the Australian Electoral Commission (AEC), however a Party cannot be registered once an election has been called," the spokesman said.

The spokesman promised voters they would not be silent on issues like internet censorship, file sharing and the Anti-Counterfeiting Trade Agreement (ACTA) in the lead-up to the election.

"We will still work to make these issues election issues, and topics of public debate and concern," the spokesman said.

In its absence, the Pirate Party said it would not "tell you how to vote" but urged voters to carefully examine each party's formal and written policies and to "place your own preferences"

"Choose a minor party that you think will do great things for this country. Our preferential voting system means a vote for a minor party is not a vote wasted," the spokesman said.

The Australian Electoral Commissioner Ed Killesteyn called on any Australians that weren't enrolled to do so before 8pm on Monday 19 July.

"Australians who are already on the electoral roll and who have moved address have a little longer until 8pm Thursday 22 July 2010 to update their enrolment by lodging an updated enrolment form with the AEC," Killesteyn said.

"It's important that all eligible Australians enrol now. Anyone not on the roll by the deadline won't be able to vote and have their say in the 2010 Federal election."