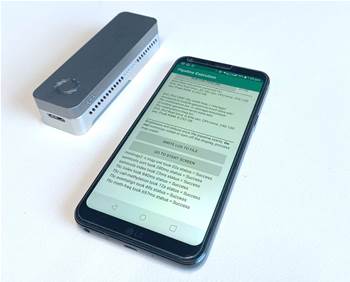 Smartphone-based analysis in under 30 minutes.

A team led by researchers at Sydney’s Garvan Institute of Medical Research have developed an app that can analyse the coronavirus genome using Android phones.

The ‘Genopo’ app combines a number of available bioinformatics tools in a single application that was “miniaturised” to work with the processing power of consumer-grade mobile devices, rather than the high-end computers or cloud infrastructure typically used in genetic analysis.

In a study published in the journal Communications Biology, the researchers outlined how they were able to run the app on seven different Android-based phones, ranging from a Huawei AMN LX2 with 2GB RAM through to a Samsung A70 with 8GB RAM.

The app analysed data sourced from portable genetic sequencers such as the Oxford Nanopore Technologies MinION, which have been used for Ebola surveillance in West Africa and to genetically profile microbial communities in the Arctic.

Nanopore devices have also been used to determine coronavirus evolution during the current pandemic.

This involved extracting and amplifying the virus RNA from a swab sample, sequencing the amplified DNA with a MinION device, and analysing the data on a smartphone.

Across the seven different Android devices tested, the Genopo app was able to determine the complete genome sequence from raw data in an average time of 27 minutes.

The study also showed the app was able to be used to profile a DNA methylation (a modification which changes gene activity) in a sample of the human genome.

Head of the genomic technologies group at Garvan’s Kinghorn Centre for Clinical Genomics and co-author of the study Dr Ira Deveson said this “illustrates a flexible, efficient architecture that is suitable to run many popular bioinformatics tools and accommodate small or large genomes”.

“We hope this will make genomics much more accessible to researchers to unlock the information in DNA or RNA to the benefit of human health, including in the current pandemic,” he said in a statement.

“Not everyone has access to the high-power computing resources that are required for DNA and RNA analysis, but most people have access to a smartphone.

“Fast, real-time genomic analysis is more crucial today than ever, as a central method for tracking the spread of coronavirus.

"Our app makes genomic analysis more accessible, literally placing the technology into the pockets of scientists around the world.”