Free pies at the MCG to tempt fans over to iBeacon 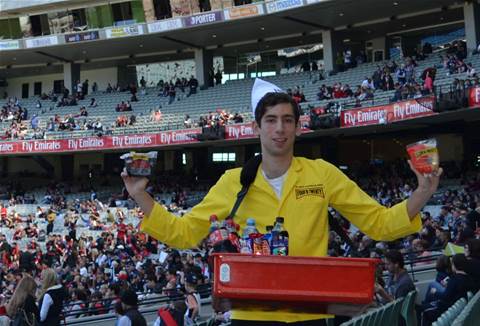 Giving customers a reason to try out new tech.

The Melbourne Cricket Ground hopes that the promise of a free pie will get fans used to using the iBeacon technology it is rolling out in conjuction with a whole-of-stadium network upgrade.

The trial, which begins today, will equip a number of the MCG’s roving pie sellers, known as pie boys, with iBeacons that trigger location-specific messages via Bluetooth technology to patrons’ phones within the stadium.

MCG patrons who have downloaded a pass to Apple Passbook or Android Wallet will be notified a pie seller carrying an iBeacon is nearby - without having to take their eyes off the pitch.

iBeacons are small, inexpensive transmitters using Bluetooth Low Energy (BLE) technology to emit a signal that is recognised by the app, which then notifies the proximity of the vendor and any special deals they are offering.

For example, anyone who downloads the pass will go in a draw to win a year’s supply of Four’n’Twenty pies while footy fans who present their notification message to selected pie boys will receive a free pie on the spot, subject to stock availability.

The trial will take place alongside improved in-stadium wi-fi and better 3G and 4G connectivity.

Ben McAuliffe, the executive manager of customer engagement at the MCG told iTnews the Four’nTweny pie iBeacon campaign provided the stadium an opportunity to learn more about the behaviour of its patrons, while also testing new tools.

“We are getting people used to mobile passes as it’s still relatively new technology and we are dealing with a challenging environment," he said.

"We have a lot of concrete and grass and that can soak up w-ifi. We’ve been testing technologies in our function rooms, corporate suites and the main seating bowl to ensure a consistent experience for all fans.”

The specifics of the stadium’s technology upgrade will be announced after the football season but McAuliffe indicated the tech team was evaluating high density wi-fi and DAS (distributed antenna system) technology as well as plans to enable high definition coverage inside the stadium alongside an increased IPTV network.

“A network upgrade is a key part of our future plans. We’re currently looking at what the picture of connectivity is for fans for now and into the future so we can best meet the needs of partners, tenants and key sponsors.”