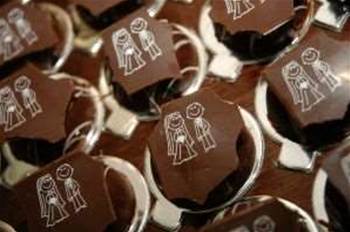 Up to a fifth of UK PC users are willing to turn over their passwords in exchange for a chocolate bar, according to a recent survey..

The Infosecurity Europe survey found that women are four times more likely than men to exchange account details for chocolate.

Of the 576 office workers surveyed, 45 percent of women and 10 percent of men agreed to turn over passwords to researchers supposedly conducting a market survey.

When the reward was changed to a ticket for a draw offering a trip to Paris, the numbers were nearly identical; 62 percent of women and 60 percent of men handed over their passwords.

Users were also duped into revealing other personal information, such as birth dates. Roughly half of those surveyed admitted to using the same password for multiple services and locations.

"This research shows that it is pretty simple for a perpetrator to gain access to restricted information by having a chat around the coffee machine, getting a temporary job as a PA or pretending to be from the IT department," said Claire Sellick, an event director for Infosecurity Europe.

"This type of social engineering technique is often used by hackers targeting a specific organisation with valuable data or assets, such as a government department or a bank."

The results of the survey are actually good news compared to last year, when 64 percent of respondents agreed to turn over their password information for the lure of free chocolate.
Got a news tip for our journalists? Share it with us anonymously here.
Copyright ©v3.co.uk
Tags:
bountychocolatefreepasswordprovidessecurity