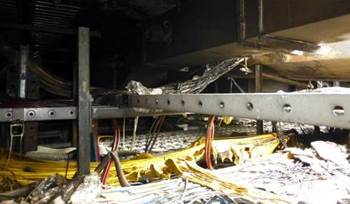 Telstra has been accused of being too focused on restoring internet and phone services in the central Warrnambool area, at the expense of outlying cities and towns that were also hit hard by an exchange fire last November.

A federal inquiry into the incident netted submissions from 23 individuals and organisations on how the devastating 22 November fire affected their lives and businesses. Less than 40 percent of the submissions have been made public so far.

Corangamite Shire Council, which has about 17,000 residents, provided the most detailed impact statement of those published so far.

It accuses Telstra of providing a "Warrnambool-centric" response to internet and phone outages across South West Victoria, "with little consideration given to other areas impacted".

"The impact experience in Corangamite was greater than that initially indicated by Telstra," the council noted.

The council accused Telstra of demonstrating "complacency to the Corangamite community" through its last-minute organisation of community meetings.

"The unfortunate perception was that Telstra did not want people to attend the meetings or receive up-to-date information," the council stated.

"The information that was provided by Telstra at these meetings was inadequate and often incorrect. The Telstra response appeared to lack organisation and resourcing."

While acknowledging the fire was an unprecedented event, the council believed Telstra "should have had appropriate disaster recovery measures in place to respond and restore services promptly".

It sought an assurance that such measures would be in place in case a similar event ever occurred again.

The owners of a beef cattle property near Casteron in Glenelg Shire similarly reported feeling "forgotten" as Telstra went about restoring services in the region.

"It took far too long to restore services to our community," the submitter, Linda Edge, wrote.

"We felt a forgotten section of the community, a long way from the apparently more important metropolitan area, insignificant, ignored by government, and Telstra."

"A public meeting was held in Hamilton but no one knew of it due to lack of information," Phillips said, alleging only 30 of the city's 9379 residents showed up.

Edge said the farm was unable to conduct business while phones were out.

"Our business is conducted by phone, as we ring meat buyers, suppliers etc.," Edge wrote. "No cattle sales could be negotiated during that time."

Recovering from a heart attack, and with the threat of bushfires near the property, Edge also reported anxiety and stress from having no way to contact emergency services if needed.

District nurse Carolyn Hotker said the landline cuts meant "vulnerable clients" like the elderly had no way of contacting anyone in the event of a medical emergency.

"Some clients felt scared knowing if they had a fall or accident they were not able to contact anyone," Hotker wrote.

"Some of these elderly do not drive, some are house bound. Phones can be a life line for them."

The federal inquiry is being run simultaneously with an internal Telstra investigation into the exchange fire, the results of which are to feed into the Government's examination.

iTnews sought comment from a Telstra spokesperson on the status of its own investigation but did not receive a response by the time of publication. The carrier is due to report financial results today.

The fire, which occurred at about 4.30am on Thursday 22 November, knocked out services for more than 60,000 residents of Warrnambool and surrounds.

The exchange sustained damage to about 60 percent of the building, although the main distribution frame (MDF) was spared.

Telstra sent in teams of technicians to "re-parent" outlying sub-exchanges to get fixed services back up and running. About 50 technicians were working on restoration at any one time.