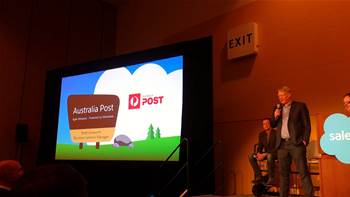 Staying fast when the environment balloons.

Australia Post first started using Salesforce in 2011 to increase its “agility” and the speed at which it could make system changes to meet new business needs.

Five years on, and with a “main” Salesforce environment serving some 4000 standard users, business systems manager Brett Ashworth insists the organisation has lost little of that agility as the environment has grown.

When the journey began, Ashworth and his team offered a twice-weekly release cycle for changes to be requested and made to the production environment.

“It used to be [like that] when Salesforce was simply a sales pipeline tool,” Ashworth told Salesforce’s annual Dreamforce conference.

“As we’ve grown we’ve sort of thinned that a little bit - we now run a weekly release process.

“The requirement from the business when we first went live with Salesforce was for agility and to enable fast change. As we’ve grown the business requirements have changed ever so slightly.

“They still want speed of change but they now want to ensure that we manage and maintain the risk, make sure that there’s no adverse impacts to our user community, or importantly to our customers and the customer experience.”

The journey so far

AusPost – which had previously been wedded to the SAP ecosystem – initially brought in Salesforce to ease “frustration” the business felt at the amount of time it took to make even minor alterations to its systems.

“Certainly in our ERP space, a change as simple as [adding] new picklist values or a new field to capture some business-required information might take anywhere from 8 to 12 weeks,” Ashworth said.

“The business moves pretty quickly and they want the changes in as soon as possible.

“So there was a level of frustration within the business, certainly in sales, where they wanted the ability to do fast changes, and for that reason we’ve kept that [release process] weekly.”

The team that handles the weekly release cycle presently consists of five BAU admins, five developers, and five project developers due to “the number of projects we’ve got running”.

“We’ve had one of the busiest years on the platform so far and it doesn’t look like slowing down,” he said.

“I think there are another six projects in the pipeline. Anybody that’s dealing with the customer or customer information is now moving their capability onto the [Salesforce] platform.”

Maintaining pace at a ballooning scale

Ashworth said the weekly release process typically sees his team begin their Mondays “talking with their stakeholder groups, discussing any new requirements that the business might have, when those changes will go in and the priorities".

Australia Post has 56 stakeholders in its Salesforce environment – and ten “stakeholder units” that have recently been identified as its most important – or as Ashworth says, those “who we need to keep close”.

Once the admin team has its briefs in from the business, work begins on the changes.

“Behind the scenes, we’re using a couple of tools – Jenkins, Stash, Sourcetree and Eclipse – to assist us moving through the path to production.”

Ashworth said the admins have a concept test ready for the business each Thursday; once approved, it passes through further testing and UAT, before being moved into production on the Thursday of the following week.

Keeping the release cycle more or less intact was important because it enabled the admins to “react to certain customer situations more quickly”, Ashworth said.

It also continued to help AusPost derive ROI from the platform.

The organisation has driven further value out of Salesforce by progressively bringing more parts of the business onto the main instance.

“Over the last five years it’s grown as the other business areas have seen how easy it is to come on board, and how quickly we can make changes,” Ashworth said.

“We’ve had our marketing team join, we’ve got our two contact centres running [off it and talking] back to our delivery operations area for issues around missing parcels, our social team run off the platform, and we’ve got credit management on it.”

What gets left behind?

While AusPost also has a couple of “legacy Salesforce instances” that pre-date its formal adoption of the technology in 2011, it is unlikely they will be subsumed by the main instance any time soon.

“Some of them run small business processes, most are pure out-of-the-box setups,” Ashworth said.

“We don’t push any changes back to them, and the business generally don’t want any changes made to them.

“We have discussed bringing those into the main instance, but there’s a cost in time and effort of that, and there’s no business benefit in doing it.