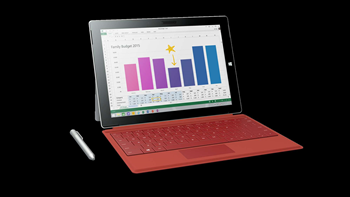 Microsoft is continuing its effort to become a player in the mobile hardware market, today releasing the new Surface 3 tablet, which comes with longer battery life and weight savings for better portability.

The amount of system memory has also been pared back in the Surface 3, which comes in two configurations with either two or four GB of RAM, where the Surface Pro 3 can be had with either 4GB or 8GB.

A new Intel Atom X7-Z8700 quad-core processor powers the Surface 3, unlike the full-blown Intel Core i3, i5 or i7 mobile chips in he Surface Pro 3.

While the Surface Pro 3 can be optioned with up to 512GB of solid state storage, the Surface 3 tops out at a maxiumum of 128GB.

Surface 3 does however come with an additional magnetometer sensor and 4G LTE mobile broadband connectivity with a nano-SIM slot in some markets - but not in Australia and New Zealand.