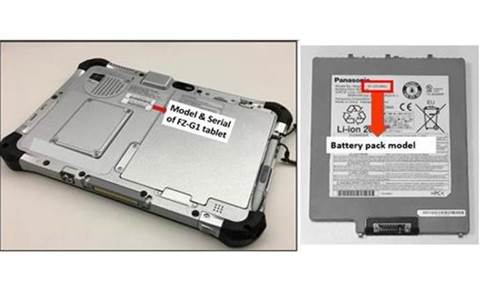 Panasonic Australia has issued a recall on its rugged Toughpad FZ-G1 tablet over concerns the battery could catch fire.

Affected models were sold from March 2013 to February 2017 through Multimedia Technology and Sektor Distribution, according to the ACCC.

The rechargeable battery pack may overheat during use and cause smoke or ignition, Panasonic warned.

It is asking users to remove the battery pack from the tablet and only operate the device when it is plugged into a power source.

The company said users could also download and apply a BIOS utility upgrade that will allow safer use of the battery pack.

Panasonic said it was working on determining the root cause of the issue, and would be in contact with customers directly and via its website with the steps they will need to take.

Affected models can be found here. The model number is located on the sticker of the tablet and battery pack.

Panasonic similarly recalled the rechargeable battery pack sold with certain models of its CF-S10 ruggedised laptop one year ago over concerns it could cause the device to catch on fire.

Got a news tip for our journalists? Share it with us anonymously here.
Copyright © CRN Australia. All rights reserved.
Tags:
battery fire hazard hardware panasonic toughpad