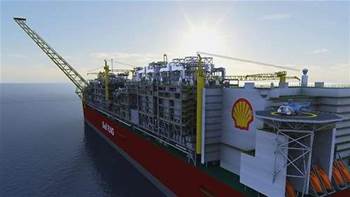 Flying workers out to floating platform an "exception" rather than rule.

Implementing a subsea fibre optic link to underpin automation and remote monitoring aboard Shell Australia's forthcoming Prelude floating liquefied natural gas (FLNG) platform means it will only need to fly people out to the plant "by exception".

The energy giant joined fellow LNG operator Inpex in 2014 as a foundation customer for a then-new subsea cable between Darwin and Port Hedland.

The 2000km, $100 million cable was built by Alcatel-Lucent and managed by Nextgen Networks, which is now part of Vocus.

The Prelude project is being closely watched by the LNG sector as a potential model for future gas extraction from increasingly remote offshore fields.

Speaking at this month’s Gastech conference in Tokyo, Shell Australia’s vice president of production, David Bird, said Prelude’s systems would mean flying staff out to the remote floating platform "only by exception".

The enormous Prelude platform is being equipped with process control, monitoring and automation technology by Emerson. It is also fitted with communications and entertainment systems by Alcatel-Lucent, and both of these are backed by the subsea cable.

Prelude’s operations will be monitored remotely from Shell Australia’s collaborative work environment (CWE) in Perth, which acts as the company’s main operations centre.

Shell has set up other CWEs worldwide which provide similar remote support for offshore operations.

“It’s incumbent on all of us that we minimise [employees’] offshore exposure,” Bird said.

“Through the fibre optic link, we really have the opportunity to ensure that all of the monitoring, surveillance and engineering roles remain onshore, and it’s only by exception that we are putting people in helicopters and [flying them] out to the facility.”

Bird said there was presently “around 90-100 full time employees in engineering, planning, surveillance and … managerial positions based out of Perth to support 24x7 operations on the [Prelude] facility.”

Emerson last year said it would have two engineers live aboard Prelude “who will work with other team members who remotely monitor the facility’s automation” from the CWE in Perth.

The CWE will also “enable the Emerson team to consult with Shell specialists as they use a proactive maintenance strategy to detect potential concerns, identify corrective actions, and arrange for delivery of any required equipment to the facility”, Emerson said in a statement.

Bird said while the fibre optic link was important for surveillance, monitoring, and remote support of Prelude, it also had other roles: including to improve living conditions for those staffing the floating facility.

The subsea link will power a wi-fi network and entertainment systems for workers.

“You and I take for granted - by living in metro areas - the ability to Facetime or Skype with family,” Bird said.

“With wireless throughout the accommodation block, that can be afforded to employees despite living in such a remote location.”

In addition to the benefits that Shell could derive from the subsea cable, Bird said the company was also pleased at playing a role in financially justifying the cable project, which he said benefitted a number of remote communities in north and north-western Australia.

“With this subsea link between Darwin and Port Hedland we are providing [further] redundancy [of broadband access] to all of the remote communities as well as those significant metropolitan areas of Port Hedland and Darwin,” he said.

“Previously, they had only been served by land-based cables, and for those that know this part of Australia it is tropical and certainly has an annual wet season, so they were experiencing outages due to these cables being washed out on average every two-to-three years.

“This [subsea cable] infrastructure is part of having an FLNG solution and the fibre optic link … has now created an addition to this critical part of Australia’s internet infrastructure.”

Shell has never confirmed when it expects to begin producing gas using the floating LNG plant. It will reportedly occur sometime this year and begin generating cash in 2018.

The floating vessel is being built in shipyards in South Korea before it is transported to the Prelude gas field 475km NNE of Broome.