One of 03b's satellites being assembled in Cannes, France. Credit: vendor

A satellite provider is set to launch a broadband service that covers the Pacific including Australia with gigabit speeds and comparatively low latency.

Jersey, Channel Islands-based company 03b — which counts Google as an investor — will launch four medium orbit (MEO) satellites on May 29.

These will orbit the earth at roughly a quarter the height of of geostationary satellites such as NBN Co's ones, providing considerably lower latency or packet delay.

The company's vice president of marketing Vicki Warker told iTnews from Washington DC that the O3b service covers the entire landmass of Australia and that it is the first MEO deployment for broadband delivery, as earlier ones have been used for navigation and low-speed communications.

"O3b is the first to offer fibre-like speed and the low latency suited for broadband," Warker claims.

The speed and low latency means web pages load as quickly as terrestrial broadband services, Warker says and lets customers use latency-sensitive applications such as web services and cloud computing in remote locations in island nations and oil platforms. 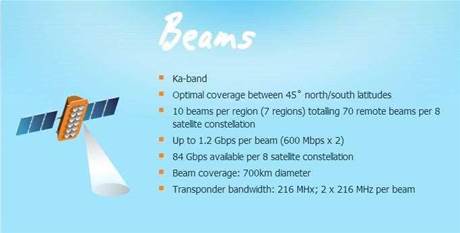 Customers need antennae 1.8 to 4.5 metres in size, and up to 7.3 metres in American Samoa. Two are needed to connect to ascending and descending satellites, meaning the cost of terminals are somewhat higher than for traditional geostationary satellite deployments.

The company will not sell connections directly to end-users.

03b sales director for the Pacific, John Turnbull, said the company was in discussions with NBN Co before announcing it would build its own satellites.

"There is no reason why we could not speak in the future if latency become an important priority for NBN Co to consider," Turnbull says.

Two terrestrial gateways will handle traffic in Australia: one in Perth and another in Dubbo. A total of seven gateways will be built around the world by O3b.

Pending the succesful launch of the satellites, 03b expects them to be operational by August this year.