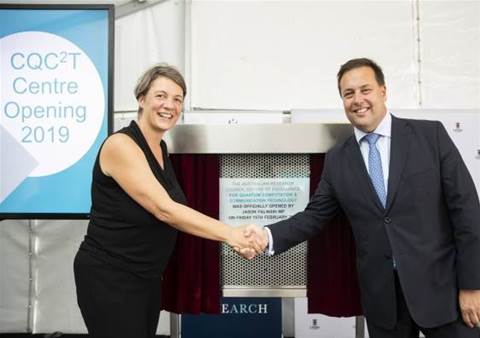 The Australian Research Council (ARC) Centre of Excellence in Quantum Computation and Communication Technology (CQC2T) has been officially launched at the University of NSW Sydney after receiving $33.7 million in federal funding.

CQC2T is an international collaboration from seven Australian universities led by 2018 Australian of the Year professor Michelle Simmons, and counts more than 25 international research partners.

“We are very fortunate to have a team of exceptional researchers in Australia delivering world-leading quantum information research,” Simmons said at the launch on Friday.

“At the very forefront of what humans have achieved to date, our research achievements and strong global collaborations, have put us in pole position to drive an industry that will shape the information economy of the 21st century.”

Despite having operated since 2000 with Simmons as a founding member, this latest round of ARC funding qualified for an official launch as a Centre of Excellence.

In the intervening 19 years, the centre’s researchers have pioneered a number of achievements, including the development of a sensor array capable of reading single atoms and successful experiments with photon-based microchips.

The ongoing success of CQC2T has also led to the development of two commercial ventures being spun out, QuintessenceLabs for secure communication systems and Silicon Quantum Computing for silicon-based quantum computing.

Researchers at the centre are now proposing to implement quantum processors able to run error corrected algorithms and transfer information across networks with absolute security.

Falinski said at the launch the funding would allow the centre to build on its strong successes.

“Australia has firmly established itself as a global leader in this 21st century technology – $33.7 million in funding will enable UNSW to continue to build on its world-leading research to develop complex quantum processors that correct errors and transfer information across vast networks with absolute security.”

The ARC’s chief executive professor Sue Thomas added that the CQC2T has an unparalleled record of success.

“At the ARC, it’s our great privilege to be able to support (this) work and we look forward to the great successes to follow,” Thomas said.